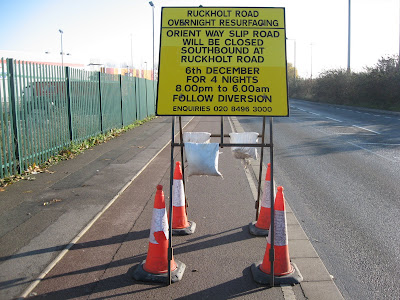 This is the Orient Way two-directions cycle path in Leyton, which is sandwiched between the road and a parallel tarmac footway.

A few years ago it won the London Cycling Campaign’s London Cycling Award for Best Cycle Route – showing that the LCC has little understanding either of good cycle path design or of strategic cycling routes in the London Borough of Waltham Forest.

At the time it was built Orient Way was opposed by local environmentalists on the grounds that it was a link road which simply served to increase local car dependency and use. It was also seen as an ominous development, because in building a road like this on the edge of the Lea Valley it potentially opened up this green space to future road development. Transport planners have long hungered to construct a major road up the valley in order to ‘ease congestion’ in surrounding boroughs. The Orient Way link road provides a useful foundation in any future development of this sort. Putting a sub-standard cycle path alongside the road was simply a cosmetic ‘Green’ gesture of the sort which would fool only the most gullible kind of Green transport activist. Step forward the London Cycling Campaign…

The proximity to the adjacent road ensures that the cycle path surface suffers from grit and other detritus thrown up by passing motor vehicles, a problem exacerbated by poor maintenance on the part of Waltham Forest council.

Orient Way has a 30 mph limit, which the advisory speed signs indicate is flouted on a massive scale. The proximity of speeding motor vehicles does not make for an attractive cycling environment.

Worst of all, the route is of no strategic significance and appears to have very low levels of cycling. No cycle counts ever seem to be taken on it, or if they are the council chooses not to publish the results. And Transport for London’s cycle counts, used to substantiate broad generalisations about ‘cycling in London’ exclude all routes in Waltham Forest, not least a route like this.

This cycle path also runs across side-entrances to industrial estates and large businesses, requiring the cyclist to give way, not the driver. This is the classic condition of British segregated cycle paths, where the cyclist always has inferior status at side entrances and junctions.

Where the path crosses the A104 and the A106 the traffic light phasing favours motor vehicles, not cyclists.

And as this photograph taken yesterday shows, obstruction of the cycle path by a contractors’ sign (giving information for passing drivers which is of no consequence for cyclists) is regarded as a perfectly reasonable thing to do.
Posted by freewheeler at 11:04