Thames Materials lorry driver arrested after yet another death 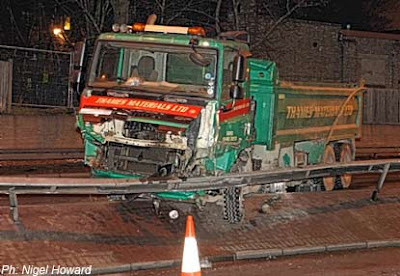 Remarkably, it now turns out that the lorry involved belongs to Thames Materials, the same firm involved in the killing of cyclist Catriona Patel. The driver who killed Catriona had 48 previous convictions.

After the latest fatality Thames Materials has expressed its sorrow, which is touching from an outfit which declined to speak to anyone after the verdict on Catriona’s killer (read Dominic Perry here, Joanna Bourke here and Ross Lydall in the Evening Standard).

But though expressing its sorrow after this second killing, the man from Thames Materials

refused to say if the driver in the Chiswick crash has been suspended or if measures have been taken to improve the safety of his firm's lorries.

is being questioned on suspicion of [causing] death by dangerous driving, driving while unfit and possession of a controlled substance.

This evening, along with another cycle commuter, I was "buzzed" by one of Thames Materials' Tipper lorries on Boston Manor Road in West London. The driver presumably thought it was ok to only give cyclists a few inches of passing space despite there being ample room to pull out safely whilst overtaking us.

I then watched as the same lorry was driven straight across a mini roundabout that another cyclist was already crossing. The tipper lorry didn't have any working lights on its rear number plate and the plate itself was smeared with muck as was the tipper lorry fleet number - rendering both illegible.

As it passed me I noticed that the lorry didn't have the top mirror on the offside cab mirror cluster to give visibility of the blind spot and also didn't have any "how's my driving" type signage on the rear.

Thames Materials Ltd [is] a west London waste management company, which has a record of breaking safety regulations and poor maintenance of its vehicles. In March 1999 the Traffic Commissioner reduced its licence to only seven vehicles.

Thames Materials Ltd failed several inspections, the company and its drivers had many convictions. In 2002 the Traffic Commissioner tried to revoke its licence to operate lorries, but this was overturned on appeal.

Posted by freewheeler at 11:56