The family of a young Wigton woman killed in a crash have called for tougher penalties for drivers who cause death on the roads.

Their comments came after a man who knocked down and killed a pregnant woman in Penrith in a separate incident had his jail sentence cut from two years to 18 months.

Anne-Marie McCreadie, 29, of Lowry Hill, Carlisle, died along with her unborn son when a BMW driven by Andrew Harrison mounted the pavement in Wilson Row, Penrith, in May last year.

Harrison, of Pategill Park, Penrith, was convicted of causing death by dangerous driving and was jailed for two years at Carlisle Crown Court in July.

(Harrison had a previous conviction for dangerous driving but the aptly named Laws decided that this was just an amazing coincidence and had nothing at all to do with him going on to kill a pregnant woman walking along a pavement.)

But Andi Crossman, 26, from Wigton – whose sister-in-law Cath McNeil, 20, was killed when a teenage driver lost control of his car – has hit out at the sentences handed down to motorists who cause death by dangerous or careless driving and called for punishments to be brought into line with those for manslaughter.

Sparkes pleaded guilty to causing death by careless driving and was handed a suspended 10-month-jail sentence in May.

The court heard that the teenager, of Ravenswood, Kirkbride, near Wigton, passed his test just days before the accident and was said to have driven along a remote country road at speeds of 70mph.

I do not know if Dennis Putz plans to appeal against his sentence but I’m sure if he does it will receive objective scrutiny from the finest legal brains in Britain.

And now here is a photograph of Lord Justice Laws. I sort of have a feeling he’s not a cyclist and also does very little walking. 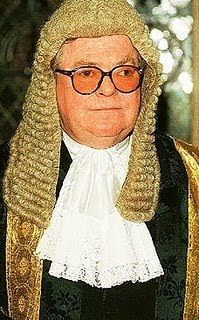 Posted by freewheeler at 13:23