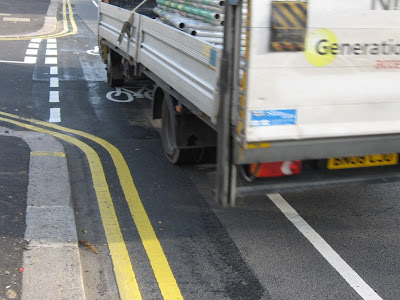 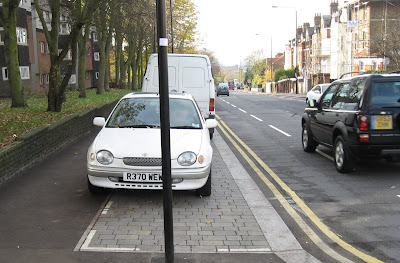 The judges reached a very quick decision this year, with one outstanding entry easily overshadowing the others. The Forest Road Corridor Scheme on the A503 between the junctions with the A104 and Woodstock Road was a clear winner for its multiple achievements.

These include seizing footway space and the original cycle lane and converting them into free parking bays at a cost of £10,000 per bay, in the process creating a new cycle lane closer to the middle of the carriageway. This both created an entirely new danger of ‘dooring’ while bringing cyclists much closer to overtaking buses, lorries and cars.

Ostensibly done to reduce traffic speeds there was much admiration for the way the transport planners at the last moment slipped in a traffic order raising the speed limit from 30 mph to 40 mph between Beacontree Avenue and the A104, while also creating a pinch point.

The scheme has demonstrably failed to reduce traffic speeds and a recent test showed drivers on the westbound carriageway entering the 30 mph zone at 42 mph and continuing at this speed along the entire length of the scheme.

There was also admiration for the way in which the contractors managed to block the footway for pedestrians during the course of construction, forcing them into the cycle lane with no protection.

Finally, the continuing failure to provide an ASL at the lethal left-turn off the eastbound A503 at the junction with Hale End Road also impressed the judges.

In short, spending almost one quarter of a million pounds on a car-centric scheme which made cycling even more unattractive and dangerous made the cycle lanes on this route truly outstanding, even by the standards of the London Borough of Waltham Forest.
Posted by freewheeler at 20:27