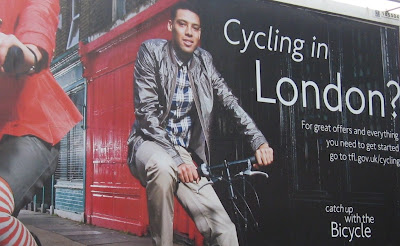 It’s one metre wide and between the bus and the railings. Enjoy. (The A112 in Waltham Forest.) 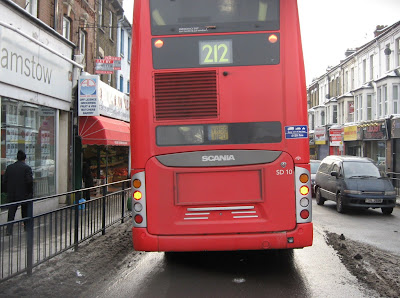 Nobody comes to this blog for cheery optimism about the future of cycling, so here’s what I’ve noticed on a quick scamper through the report.

At one point the report refers to

Journey time reliability is defined, for this indicator, as the percentage of motor vehicle traffic which, for a ‘typical’ 30-minute journey, takes less than 35 minutes (the typical 30 minute journey time plus a five-minute ‘allowance’). On this basis,TfL’s journey time reliability indicator suggests that between 89 and 90 per cent of journeys on major roads in London are completed reliably - a value that can act as a baseline for future improvement initiatives.

At the core of TfL’s transport thinking is the desire to accommodate and benefit the use of motor vehicles. Mass cycling is most unlikely to be achieved as long as the real priority lies elsewhere. The recession has cut car use, and so have things like the congestion charge, congestion itself and parking availability or pricing. But overall things are good for London drivers. London is a car-centric city which privileges the motorist, even though

Levels of car ownership in London have tended to be lower than those of the rest of the country. According to the National Travel Survey (2008/09), 43 per cent of households in London did not own a car.

Non-car-owning households are systematically discriminated against, unlike the 17 per cent of households in London having two or more cars

London achieved a 7 per cent net shift towards public transport and walking/cycling at the journey stage level, which is equivalent to a 5 percentage point increase in trip-based mode share for public transport, walking and cycling in London. This means that travel in London is becoming more sustainable.

Crap. Lumping together public transport, walking and cycling is a weasel way of masking the realities of quite disparate travel modes, and giving a false impression of cycling. And there is nothing sustainable about buses, which are high polluters and also a cumbersome way of moving people around dense urban environments. You don’t see cities in Denmark and the Netherlands choked with buses. Cycling is both much more efficient and also incidentally much more sustainable.

And it’s not just buses and private cars which clog up London:

London’s 22,000 licensed taxis account for about 200,000 journey stages per day and are a vital part of the transport network, particularly in and around central London.

The number of vehicles licensed has grown from 37,000 in 2005 to 49,000 in 2009 and 2010. Over the same period, the number of licensed drivers has increased from 19,000 to 59,000, working within 2,900 operator businesses. While this growth largely reflects the progressive nature of the licensing process in the earlier years, the data for more recent years continues to show significant year-on-year growth

Mode shares in 2009 were: public transport 41 per cent, private transport 37 per cent, walking 21 per cent and cycling 2 per cent. These shares are closely comparable to those of 2008.

2.1 per cent for Londoners overall.

The target is for

which is deeply unambitious. Can even that paltry target be achieved by the current strategies? I very much doubt it but we’ll see.

I was fascinated to learn under

that the biggest single cause wasn’t roadworks but road crashes:

There’s the usual guff about road safety with road danger being defined solely by injury statistics. But even here there’s an underlying message:

Still the good news is that

A total of 3,227 people were either killed or seriously injured on London’s roads during 2009.

The TfL report contradicts the recent GLA report and may be more accurate:

However, like the GLA report there’s a suggestion that bike hire is not leading to much of a switch from the car:

Cycle Superhighways users and bike hire users had a similar profile to London cyclists generally. White, aged 25 to 44, predominantly male. Mostly affluent (no surprise that the Guardian and the Independent have bike blogs). These are the people who not only dominate hardcore cycling in the capital but who also, I think, dominate cycle campaign groups. Cycle campaigning can be very good at getting small scale improvements for those prepared to cycle in traffic. What it isn’t doing is enabling mass cycling among the broad and diverse non-cycling majority, which has repeatedly made clear its reluctance to cycle among motor vehicles. The traditional response of campaigners is to insist that these fears are groundless and to go on believing, in the face of all the evidence, that soft measures and not infrastructure will one day get us there.

The full report can be read here.

The London Cycling Campaign basically believes that plugging away in the traditional way will eventually bring about a critical mass that will result in an explosion of cycling, making it a mainstream activity. The problem I have with that is that I don’t know anywhere in the world where this strategy has worked. All the indications are that we are light years away from achieving critical mass in London as a whole, and that even where cycling levels can be phenomenally high (by British standards), as in the City of London, the transport planners are determined that not an inch of road space will be ceded to cyclists. Whereas we know that the world’s most successful cycling country, which happens to be a European country with high levels of car ownership, reversed its own car dependency and enabled mass cycling through infrastructure, the reallocation of street space and restrictions on the use of private cars in city centres. None of this is on offer in London, and here in Waltham Forest street space continues to be reallocated from the pedestrian and the cyclist to the motorist.

There’s nothing new in what I’m saying. Paul Gannon said it all back in the year 2000.

It seems screamingly obvious to me that this approach is an abject failure. Cycling here has declined over the long run, while it has increased or stayed steady at high levels in those continental European countries which rejected our way of doing things. I repeat this is a point which those who oppose segregated facilities have to address.

Such wild and intemperate ideas were evidently shunned by the London Cycling Campaign. But back then nobody needed to take lessons from the Dutch. Here in London we had the magnificent Cycling Strategy for London, which had the support of the Mayor, politicians, councils and opinion-makers across the capital. There was every cause for optimism since it was going to deliver

Didn’t that work out well…
Posted by freewheeler at 17:01