What’s wrong with cycling in Chingford? 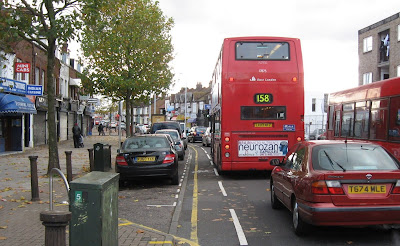 In the London Borough of Waltham Forest cyclists are truly blessed by having a pro-cycling local authority which is proud of its achievements.

The photograph above shows the conditions for cycling in Chingford on the southbound A112 (Chingford Mount Road), a fairly typical stretch of those “23 miles of cycle lanes”. This is a strategic route, running from Chingford’s two main shopping centres south to the centre of Walthamstow.

This road terminates for cyclists at the Billet underpass (one of the “three major roundabouts with cycle underpass facilities” mentioned on the council’s website.) The Billet is where the A112 meets the North Circular Road (A406) and the B179 (Billet Road). You could cycle round the Billet roundabout if you wanted to but I have only ever once seen a cyclist attempt this.

Instead, cyclists are diverted into the underpass, where the council’s cycle count figures over the period 7 am – 7pm are

These figures indicate what statisticians would call a trend. But no one in the London Borough of Waltham Forest appears to be particularly troubled by it.

The recent startling collapse of modal share in Hackney from 8 per cent to 4 per cent (as measured by TfL) may just be a temporary statistical anomaly or it may be another symptom of the hard reality that cycling not only doesn’t thrive in a vehicular cycling environment with sub-standard, car-centric or non-existent cycling infrastructure but it may actually decline.

In such a car-centric society as the UK it would be next to impossible to take meaningful space away from cars. We also have a lot less room: it's a small country with narrow roads already.

I never find the argument that there’s no space remotely convincing but it’s an article of faith among individuals who hold prominent positions in the world of cycle campaigning. They refuse to see what is in front of their eyes (in much the same way that the Waltham Forest branch of the LCC continues to doggedly insist on its website that the Billet underpass is probably the best cycling facility in the borough).

Yet here on the A112 you could slot in a segregated cycle path on the Dutch model AND keep the car parking. (You can then get rid of the parking bays later when cycling’s modal share has rocketed.)

You could run a segregated cycle path to Dutch standards all the way from Station Road, Chingford, to the George Monoux Sixth Form college in Walthamstow and then send cyclists on up Farnan Avenue to connect with the A503 (Forest Road). The space is there along almost the entire route and where it isn’t there are other ways round the problem. Most of this could be achieved with minimum distress to drivers or car parkers. Do that and you will get people cycling in large numbers; don’t do that, and expect them to cycle on narrow cycle lanes in a car-saturated environment like that shown in the photograph above and they won’t. Boasting about how many miles of cycle lane you have is rather beside the point when people won’t use them.

Segregated bicycle paths forming a coherent, connected and convenient grid were crucial in reversing Dutch car dependency and persuading people to cycle instead. The Dutch Bicycle Master Plan describes how

This significant expansion of the infrastructure for bicycle traffic is undoubtedly a contributing factor to the revival of bicycle use since the mid-1970s. People are quicker to choose the bicycle because they generally experience less delay when cycling on bicycle paths and feel safer there than in situations in which they need to share the space with fast moving car traffic.

The Dutch discovered that a grid of direct, high quality segregated cycle paths which were closely spaced was central to increasing cycling in any significant way.

One example among many others is that of Houten.

Trying to increase cycling with lesser measures just doesn’t work. Permeability (road closures with cycle access) and 20 mph zones bring benefits but they are never the catalyst. The London Borough of Waltham Forest supplies a good example of this. The borough has extensive traffic calming, road closures with cycle access and lots of 20 mph zones, yet cycling’s modal share remains stuck at one per cent. Why? The primary reason is that if you want to go very far on your bike using a reasonably direct route then you soon have to use a road which is shared with high volumes of traffic, coming very close. This is not a pleasant experience and trying to persuade non-cyclists that statistically they are not in danger just isn’t going to be enough to convince them.

In urban areas in the Netherlands which have roughly the same population as Waltham Forest, you can get 30,000 cyclists a day on similar strategic routes. And historically this phenomenon originates in direct, convenient high quality segregated cycle paths –a genuine bike grid. It did not begin with on-road cycle lanes painted blue or bike hire schemes or 20 mph zones or strict liability laws or cycle gaps or posters of smiling girls on bicycles. And until Britain takes this lesson on board, mass cycling is never going to happen.

Unfortunately not a single U.K. cycling organisation displays any understanding of how the Dutch reversed their car-sickness. If you look at the digest of what was said by Britain’s leading cycle campaign groups at the recent Cyclenation conference in Edinburgh, you will see that for them it remains business as usual – rosy optimism about the future, enthusiasm for initiatives such as Poster with message to drivers – ''give me space", and an institutionalised failure to acknowledge the importance of campaigning for the one piece of infrastructure which will begin to bring about a serious, substantial modal shift across the towns and cities of Britain: bike grids designed according to the Dutch template.

(Below) One of the cycle path entrances to the strangely unpopular Billet underpass. And yet all that is required for cyclists here is for them to join the queue of motor vehicles waiting at red, and when it goes to green the cycle path entrance becomes available for use. What could possibly be wrong with this arrangement? 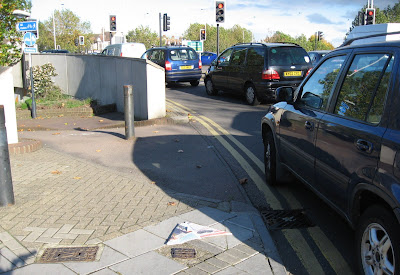 Posted by freewheeler at 10:42