A failed asylum seeker who left a 12-year-old girl dying under the wheels of his car while banned from driving will be allowed to remain in the UK, judges ruled today.

Speaking at an earlier appeals hearing, Mr Ibrahim said: 'This incident when Amy died was an accident

This high profile case has attracted a great deal of attention and commentary and it would be fair to say the decision reached is not a popular one. Responding to furious public reaction, today

Prime Minister David Cameron has spoken of his "great anger" at a tribunal ruling preventing the deportation of a failed asylum-seeker who killed a 12-year-old girl in a hit-and-run driving incident.

Mr Cameron said he hoped that the UK Border Agency would be able successfully to appeal against the ruling by the Upper Tribunal of the Immigration and Asylum Chamber on Iraqi Kurd Aso Mohammed Ibrahim.

Before Amy's death, he'd twice been banned from driving and was on bail for a third offence when the accident happened

In the intervening years, Ibrahim notched up another motoring conviction - his fifth. In 2006, he appeared in court again, pleading guilty to driving while disqualified and without insurance. This time, he was handed a two-year supervision order and banned from driving for three years.

Gun offences are taken extremely seriously by the courts whereas driving offences aren’t. Drivers who end up killing other road users very often have previous convictions indicating their unfitness to drive. Even when they kill, such drivers enjoy powerful institutional protection.

RoadPeace's position is that all culpable road deaths should be charged as manslaughter.

In this particular case the disqualified killer driver left a child dying under his car and fled (the collision was witnessed by the girl’s young brother):

She was still trapped under the car when Ibrahim got out of the car and ran off.

The maximum sentence the magistrates could have imposed was six months in prison but they are required to give credit for an early guilty plea.

The best friend that killer drivers have is an obscure body known as the Sentencing Advisory Panel, a body which believes in the basic human right to drive and that licence disqualification should be forward looking and preventive, not backward looking, i.e. punitive.

Thanks to the guidelines established by the Sentencing Advisory Panel, the lorry driver who killed cyclist Catriona Patel while intoxicated and using a handheld mobile phone, and who had a driving record which is just about as bad it gets – 48 convictions over a period of thirty years – only received half the maximum punishment of 14 years in prison. You do sort of wonder what else the killer had to do to get the full term.

Another family shared a shatteringly similar experience. Relatives of Simon Lawrence an ex Royal Marines commando, who served in Northern Ireland in the Seventies, called for the asylum seeker responsible for his death in a hit-and-run accident to be deported.

The 55-year-old motorcyclist was struck by Jean Mukadi in Harefield, West London, last June. He died instantly. Mr Mukadi, an asylum seeker from the Democratic Republic of Congo, was imprisoned for four months after admitting charges of leaving the scene of an accident, driving without a licence and having no insurance, at Uxbridge magistrates' court.

But he escaped deportation because his offences are not considered serious enough by the Home Office. Deportation is automatic only for offenders who have been jailed for more than 12 months or convicted of gun offences.

David Cameron could change a lot of things to do with the treatment of motoring offenders by implementing every single one of RoadPeace’s recommendations, but I have no reason to believe that a prime minister who has cut funding for speed cameras is remotely interested in ‘road safety’ or justice for those bereaved by reckless killer drivers.

Reaction to the Amy Houston case has not been uniformly hostile, however.

John Wood, prosecuting, said that as Ibrahim approached a traffic-calming measure on Newfield Drive a boy ran across the road. Amy was following and ran into the car.

But ‘Steve’ on Safe Speed disagrees with the prosecutor:

Sorry, but no! From what I've read, that’s an utter fallacy.

That’s right, Steve! Cycling and walking are very, very, very dangerous and abnormal activities. If you choose to engage in this kind of reckless behaviour, it is you, the child, the victim who is responsible for ensuring you do not become the victim of a negligent motorist.

And now for some statistics.

And while we are on the subject of the Home Office and its car-centric indulgences, here’s a poster which is currently being put up all over the London Borough of Waltham Forest, published by this particular state agency. I think we can all agree that even at a time of recession and cutbacks it is necessary and very important to ring-fence core funding for the assistance of absent-minded motorists. 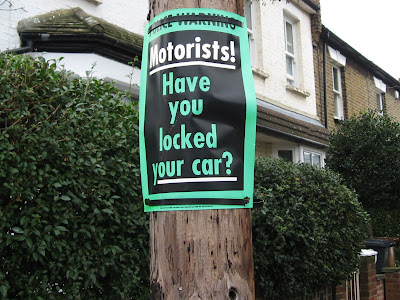 Posted by freewheeler at 15:05