The enviro-crime that Waltham Forest council colludes with

Every day, all over the London Borough of Waltham Forest, crimes and anti-social behaviour are very visibly committed, to the complete indifference of the agencies which might put a stop to it. I allude to obstruction of the footway by shopkeepers’ ‘A’ boards (so-called because from the side they look like the letter A). Shopkeepers have no right to obstruct the footway with advertising boards but they do, on a colossal scale. I recently used the Freedom of Information Act 2000 to ask the council:

Back came the answer:

Which explains why the kind of obstruction shown in the last photograph here is still continuing one year later (see below).

So there you have it. Despite its perpetual bluster about waging war on enviro-crime, Waltham Forest council colludes with blatant obstruction of the footway which occurs on a daily basis, to the detriment of blind pedestrians, people in wheelchairs, people pushing pushchairs and prams, and pedestrians in general.

When you look at photographs of streets in Denmark and the Netherlands, the striking thing isn’t just the number of cyclists but also the amazingly uncluttered streets and the pleasant walking environment.

This blog calls on Councillor Clyde Loakes to resign! He is the person most responsible for this scandal, and the hypocrisy of him posing in the Town Square as the valiant defender of a better street environment is beyond belief. 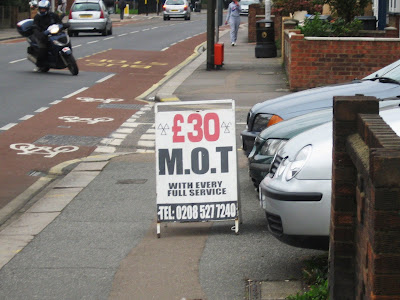