‘a complete lack of understanding of cycling in the Netherlands’ 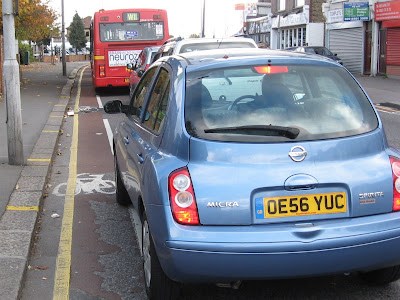 (Above) Cycling infrastructure, the A112 southbound.

The fundamentalists have remained in charge, wouldn’t you say? Look at the date on this:

The sad thing about this discussion is that we, that is cyclists' lobby, have been here before - more than once indeed. And we are in real danger that the fundamentalists, that is those who oppose segregated facilities, will again leave us as a lobby isolated and, much worse, end up with cycling itself constrained as a minority, crank interest.

Which is exactly where the CTC and LCC have taken us since those words were written ten years and one month ago. Cycling has flat-lined nationally and modal share remains risible in London, which is supposed to be experiencing a boom. The bubble may already have burst in Hackney (we won't know until next year's TfL figures if the collapse in cycling's modal share there is continuing or is temporary).

Over at Cyclists in the City they note

Here's a classic indication that nothing much is going to change:

"Projects implemented within the cycling revolution programme will nevertheless be designed with the needs of all road users in mind."

What that last bit means is cycle infrastructure squashed into motor traffic lanes and bicycle traffic put on pavements as at Queen Street. It means continuing to wobble over to the right hand lane on Blackfriars Bridge while a large proportion of the motor traffic whizz past at 45mph.
Posted by freewheeler at 11:42