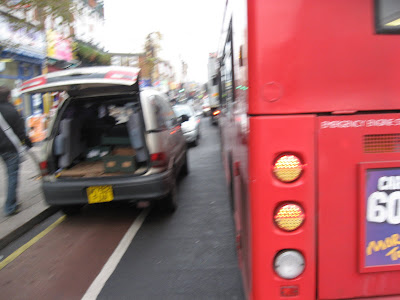 An action shot from the front line of Outer London cycling. Yesterday. A bit blurry but I was shaking from the freezing temperature, laced with everyday anxiety at cycling among dense traffic on the A112 (High Road Leyton). The A112 is the major north-south route running through the heart of the borough, from Chingford, through Walthamstow, into Leyton, and then on into Stratford.

The cycle lane was blocked by vehicles and the traffic was backed up ahead for 200 metres or so. The kind of everyday conditions which will always discourage the majority of people from cycling. The only practical and lawful way round traffic jams like this is to get round to the white line in the middle of the carriageway and head towards oncoming traffic. There’s usually space to get past but it requires very strong nerves.

Less assertive cyclists take to the pavement to get round vehicles in the cycle lane. They do it, of course, because the main advantage of cycling in a dense urban environment is speed and convenience. You can travel short distances much faster than in a car. But when you treat the bicycle as a vehicle, and a vehicle which is moreover subordinate to more important vehicles with engines, then the bicycle vehicle simply gets stuck in the traffic jam along with the cars, buses and lorries. A cyclist also experiences the added bonus of inhaling the fumes spewing from the exhaust pipe of the vehicle in front.

Situate a scene like this in the context of a document published in February this year, Delivering the benefits of cycling in outer London:

Outer London boroughs have great potential for increasing levels of cycling says sustainable transport charity Sustrans - part of a partnership that has launched guidance this week on how to make it happen.

Currently, around half of all car journeys in the outer London boroughs are less than 2 miles, a distance that could easily be walked or cycled by most people.

The report usefully diagnoses the car-sick condition of Outer London:

Half of all car trips in Outer London are less than two miles in length.

There is considerable potential for cycling in Outer London if the barriers can be overcome.

One in five people say they wish to cycle, but the choice is not open to them because of actual or perceived barriers

Around 32 per cent of households in Outer London are without a car.

And what measures did the authors of this report propose to turn round car dependency in Outer London? Firstly, ‘soft’ measures, such as

There are also vague suggestions such as

But wait! A success story!

It will take time to achieve a significant shift away from car use in Outer London, but progress can start towards this goal. Positive trends have already been seen in areas such as Sutton where the Smarter Travel Sutton programme has contributed to a 75 per cent rise in cycling in the three years of the programme; and at a time when cycling levels in Outer London overall remained virtually constant. These results have been achieved through a comprehensive package of measures including personalised travel planning, promotion and training programmes.

The fly in that ointment is the statistic. What exactly does ‘a 75 per cent rise in cycling’ mean? According to TfL, cycling’s modal share in Sutton (by residence) 2006/07 to 2008/09 average, Seven-day week, is one per cent.

When it comes to ‘hard’ engineering measures this is as good as Delivering the benefits of cycling in outer London gets:

It’s not enough. Neither the soft measures nor the hard measures will significantly alter cycling’s very low modal share in Outer London. Nothing is on offer except vehicular cycling on car-saturated streets.

To find out how you turn round car dependency and achieve a significant rise in cycling you have to refer to a document which is of absolutely no interest to Sustrans, the London Cycling Campaign, London Councils or Transport for London. By that I mean The Dutch Bicycle Master Plan.

But, hey! - let’s not be too negative. According to 'Delivering the benefits of cycling in outer London'

There were 2,178 visitors to Carshalton’s Give Your Car the Day Off event and 227 pledges made.

Hallelujah!
Posted by freewheeler at 11:52