There’s trouble down at the CTC 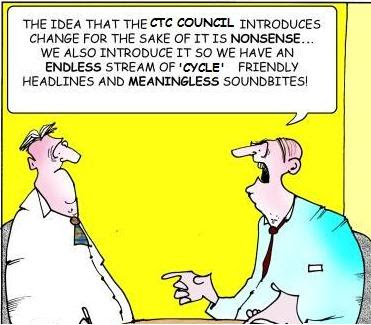 In my quest to discover who Rosanna Downes might be, I came across this cartoon. Which made me laugh.

I came to it via the Cyclists' Touring Club discussion forum. Now at the risk of causing pain to The Cycling Jim and Karl McCracken I have to confess that the internal affairs of the CTC interest me about as much as those of the Flat Earth Society. But having opened the door to the CTC forum I was startled to encounter something which resembled a combination of a snake pit, a room full of red-faced people shouting at each other, and cycling’s answer to WikiLeaks.

suggestions of a chaotic member database

and questions about CTC democracy:

Everything about the way this vote is being handled is beginning to smell...

Any clue as to why this vote is not being done via Electoral Reform as per first time? Seems to leave a lot open to abuse.

I've had a chat with a former CTC staffer this evening. The lack of anonymity troubles him/her greatly, and she/he is not alone. Voting against the boss would be seriously stupid.

The debate relates to proposed constitutional changes at the CTC. Critics say that

Members will not gain any further control over the assets and direction of CTC. In fact, they will be further disenfranchised, as the Councillors will become Trustees, whose primary concern will be the interests of the charity and the public - not of members.

Even if instructed by an AGM to do (or not do something) Council will be able (and may be obliged to) to over-ride the wishes of members if they believe it to be in the interests of the charity itself or the public.

The problem is poor management and a lack of proper governance.

For me, and I suspect for others, our objection to the merger isn't about the technicalities of charity law, it's about the way the club is run: it's about the impression that comes over of arrogance, of at times contemptuous-seeming disregard for members or, in this instance, staff, of being more interested in the size of grants and the closeness to the seats of power, in short an impression of running CTC for the benefit of the staff and management rather than the members or even of cyclists.

I must say as a non-member these arguments do sort of strike a chord. I regard the CTC and the London Cycling Campaign as organisations which have a lot in common. They are run by small salaried elites whose failure to progress the cause of cycling in no way affects their own position. The British cycling establishment is crammed with vested interests and people anxious not to rock the boat. And in the smiley-smiley world of cycling promotion failure has no impact. Life goes on, no matter how much cycling stagnates. Britain is a failed cycling state but neither the LCC nor the CTC wants to acknowledge this reality.

Seventy per cent of the LCC’s income is devoted to its staff costs, and the fundamental role of the LCC is to perpetuate its own existence, irrespective of any benefits this may or may not bring to cycling. In a similar way on an annual expenditure of £2,068,819 the CTC spent on ‘cycle campaigning’ just £190,624.

So if I was a member I would certainly be giving my support to Save the CTC (which is where I came across the cartoon).

That said, this remains at the end of the day an argument about accountability and control. Which is where my interest starts to fade away. Because the CTC does not seem to be torn with similar internal dissension about its core vision.

The CTC is unequivocally a vehicular cycling organisation, fundamentally committed to a cycling strategy – on road cycling – which historically has failed to improve modal share in the UK. The CTC’s strategy will, predictably, go on failing to bring about mass cycling in the UK. Its vision of a better cycling Britain, incredibly, is rooted in

Government guidance on the 'Hierarchy of Provision', which says that the preferred option should be to make the road itself safe and attractive for cycling. Off-carriageway provision, it says, should be the last resort in most cases. This is what the latest guidance from the Department for Transport says:

“The road network is the most basic (and important) cycling facility available, and the preferred way of providing for cyclists is to create conditions on the carriageway where cyclists are content to use it, particularly in urban areas. There is seldom the opportunity to provide an off-carriageway route within the highway boundary that does not compromise pedestrian facilities or create potential hazards for cyclists, particularly at side roads. Measures that reduce the volume or speed of motor traffic benefit other road users by making the roads safer and more pleasant for them to use.’ (Cycle Infrastructure Design, LTN 2/08).

This is the approach that CTC strongly supports

And in supporting this approach the CTC is turning its back on the main reason why non-cyclists won’t cycle – fear of traffic and a reluctance to cycle on roads shared with motor vehicles – and on the example of the most successful cycling country in the world. But then the CTC almost never references the Netherlands in its policy papers. It's as if the Netherlands has no existence.

“While separate paths may look good on paper, in the real world they are often not all they’re cracked up to be,” says the CTC. But its examples are drawn from crap British segregated cycling infrastructure, which no one denies is a joke. It’s slippery reasoning because segregation is fundamental to the Dutch cycling template, which has a proven record of success, in sharp contrast to the feeble and impoverished strategies of the CTC and LCC, which by now have a long history of failure.

The car-centric Department for Transport can hardly believe its luck that Britain’s main cycling organisation enthusiastically supports leaving the road network exactly as it is, with nothing so upsetting as the reallocation of road space from car drivers to cyclists.

This of course doesn’t matter to the CTC’s membership, which appears to be largely comprised of hardcore cyclists. The CTC strategy makes sense if you want to protect the conditions of the tiny unrepresentative minority who currently cycle but it is catastrophic if you want to bring about mass cycling in Britain. The CTC strategy of promoting small improvements to on-road cycling ensures that Britain's current car-sick condition will continue and we will never end up with our towns and cities matching what they've achieved in Groningen.

And now some shocking scenes of what happens in London when you ban motor vehicles from roads and briefly re-allocate the space for cycling. If you are a committed vehicular cycling campaigner please look away now, to avoid any unnecessary mental distress. 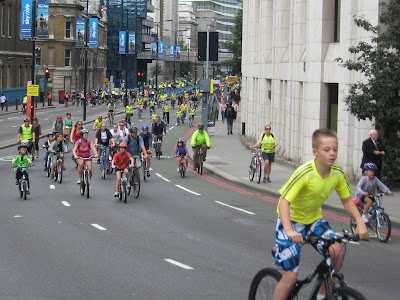 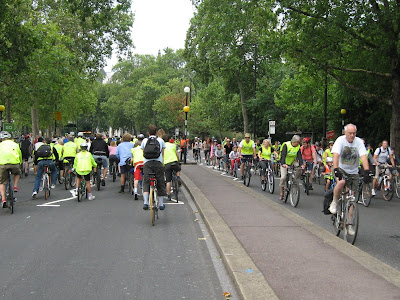