Tests revealed the driver and passenger windows were so heavily tinted they only let in 14 per cent of the light - when the legal limit is 70 per cent.

PC Rob Brettell told Southend Magistrates' Court that a check on the police national computer also revealed Edgar was not insured to drive his cousin's car and he only held a provisional licence.

"I saw the Range Rover front windows were extremely tinted, that's what drew my attention. It's a driver and pedestrian safety issue, the darker the windows the less light allowed through the window," he said.

Edgar told the court he passed his driving test at the age of 17 but clocked up six points for speeding within two years.

The footballer was given an absolute discharge for the insurance and tinting charges [WHY? Ed.] and three points and a £150 fine for driving without a full licence. He was also ordered to pay £165 court costs and fines.

He accelerated at 94mph, in a 30mph zone in his Volvo estate as the teenager crossed the residential road.

The officer, who joined Northumbria Police in 1996, received a caution for a motoring offence when he was 16, and before he was 20, he incurred penalty points for speeding and contravening a traffic signal.

This police driver, apart from destroying a life, has blighted a number of other lives forever. But he will be allowed back on the roads in 2013, since he was only banned from driving for four years.

Let us not forget the aftermath of the crash:

There were angry scenes when Hayley's distraught boyfriend George Oliver and other friends confronted officers as her body lay in the road. George, 23, was allegedly Tasered and arrested on a public order offence after yelling: "You should have seen her!"

Witness Chris Broatch said: "George was beside himself with grief. He was shouting at the police - but they went too far by Tasering him. He should have been grieving for Hayley but instead he was stuck in a police cell."

It also turned out that even though police officers are highly paid, many of them have second jobs:

More than 500 police officers across the North East and Cumbria have second jobs, BBC Look North has revealed. The figures were obtained after it emerged that Northumbria Pc John Dougal had worked as an electrician on the day he ran over and killed Hayley Adamson.

This case also highlighted once again the police’s all too frequent basic incompetence and their car supremacist obsession with what they are pleased to call ‘car crime’. PC Dougal was on a high speed chase after what he thought was a stolen car. In fact the police had simply not updated their database, even though they were aware that the car in question was no longer designated as stolen.

The police nationally are obsessed with damage to or theft of motor vehicles. Their car supremacist attitudes are in stark contrast to their broad indifference to enforcing road traffic law and the massive reduction in the numbers of road traffic police.

Who do the police harass on a massive basis? Pedestrians, mostly.

There was a sharp rise in the number of times the public had to justify their activities to police in so-called "stop and account" incidents. Members of the public were stopped and questioned by officers more than 2.3 million times last year after a rise of 26 per cent. It is the equivalent of one in every 20 people being stopped, although that proportion plummets to one in ten for the black population.

Chris Grayling, the shadow home secretary, said: "People will be highly suspicious about the scale of stop and search under terror laws. This will only serve to reinforce the view that many anti-terror powers are being used for unrelated purposes."

In reality the figure is even higher, since on the two occasions this year when I was asked to justify my activity while photographing crash sites, anti-terror legislation was not used, and the incidents were not recorded. That’s two cases of harassment of an innocent member of the public missing from the statistics. In both cases the PCSO and the PC acted outside their lawful powers, and in the first instance I was unlawfully detained, albeit only briefly.

The Metropolitan Police is the most zealous force in the country when it comes to harassing the innocent:

As we know, the actions of police officers and PCSOs are frequently absurd and unlawful.

Before the G20 discussion began Tory members Victoria Borwick and Richard Tracey echoed Lib Dem Caroline Pidgeon's concerns about tourists and others been told by police officers to delete perfectly innocent photographs they'd taken. "I hear about it all the time," Borwick said.

It talks about ‘a recent rise in burglary and motor vehicle crimes’ but fails to quantify these generalisations. It identifies a new local ‘Dispersal Zone’ to deal with ‘the rise in youth disorder’ and talks about tackling ‘antisocial behaviour’.

Needless to say ‘antisocial behaviour’ is not a label that the car supremacist Met ever applies to drivers. In fact most crime and most anti-social behaviour goes unrecorded in Waltham Forest, because it is committed by drivers, and the police have no serious interest in either recording it or dealing with it. Last year the local paper had a stirring half page headed POLICE CHIEF REVEALS HIS 2008 CRIME-FIGHTING GOALS.

Vehicle crime is down by nearly 18 per cent in the borough compared to last year’s figures and I aim to improve this figure.

Spot the contradiction between that and the claims made in the ‘Safer Neighbourhoods’ leaflet.

Commander Benbow and the Met are doing nothing at all to make the neighbourhood safer for me as a cyclist and a pedestrian. Red light jumping, speeding and drivers chatting on handheld mobiles are all at epidemic proportions, and a relatively small allocation of police resources could make a big difference. The Met’s contempt for cyclists as evidenced by its refusal to enforce Advanced Stop Lines says everything about its own anti-social, motorist-centered prejudices.

The Met is happy to harass innocent Londoners on a massive basis but would never dream of a massive crackdown on motorcyclists, 40 per cent of whom are untaxed and uninsured. It would never dream of a massive crackdown on Heavy Goods Vheicles, even though a recent spot check of 12 lorries by City of London police found that every single one of them was breaking the law in one way or another. And the Met’s apathy to drivers using mobile phones is blatant, as it is with the police nationally. New figures reveal that

That reflects not less driver crime but fewer resources devoted to police enforcement.

Let me end with Whitechapel Street, Didsbury, Manchester. It is shown in the photo below, next to the road with the subsidence. What interests me is that the pavements on both sides of the road are choked with illegally parked cars, which are blatantly obstructive. It’s a very visible symptom of the corrupt prejudices of Manchester police, who are plainly not enforcing the law with regard to obstruction and who are plainly failing in their duty of care to vulnerable members of the community. It’s the perfect memorial to both the Manchester and national traditions of petrolhead policing. 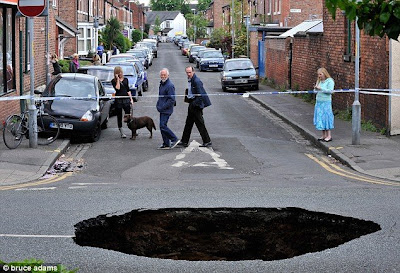 Posted by freewheeler at 14:14