55544 and other crap black cab drivers 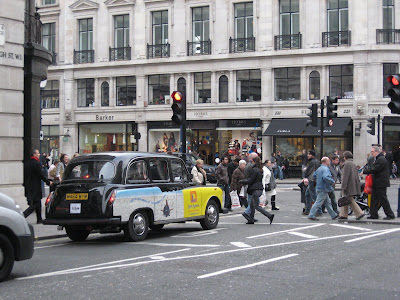 The London Traffic Report 2007 shows that taxi carry just 2.9% of commuters on the roads in the morning peak and just 0.6% of all commuters in central London. Yet taxis are allowed to take up a huge and disproportionate amount of the road space, including being given access to the bus lanes. Why is this?

A very good question, I think.

Central London is choked with black cabs. Many black cab drivers display total lawless contempt for cycling infrastructure, like the yob who drives black cab number 55544, who I observed cruise into the cyclists' Advanced Stop Line on Great Marlborough Street on February 6th. Cab drivers break the law because they know they can count on the corrupt Metropolitan Police force not to enforce it.

Some cabbies are personally abusive to cyclists. Peter Walker recommends complaining. The loophole in the complaints system is that although you can report verbal abuse by a taxi driver, you can’t report lawless driving to anyone but the Metropolitan Police, a bigoted force which despises cyclists and has a prejudiced and very cosy relationship with taxi drivers (as was vividly displayed in the case of the black cab rapist – needless to say the prejudiced and under-performing police officers responsible instead of being sacked received the traditional tap on the wrist with a feather).

I’ve never forgotten the black cab driver I witnessed on a Critical Mass ride, near Waterloo station. The driver had his hand casually dangling out of his window. His fist slowly unfurled and he released drawing pins all over the road, with the clear intention of puncturing the tyres of cyclists.

On another occasion I witnessed a black cab driver flip and trash the bicycle of a Critical Masser. The pair of shaven headed cops who turned up exuded aggression and hostility to the cyclist and were all smiles and jokes with the cabbie. The attitude of this pair of shaven-headed yobs in uniform was that anyone who goes on a Critical Mass deserves to have their bike smashed up by a cabbie.

(Below) Watch as this cab driver jumps a red light and forces his way over a crossing where the lights are green for pedestrians. He is followed by a car which imitates him. Funny how you always hear about cyclists jumping red lights, but never about cab driver louts who do it. 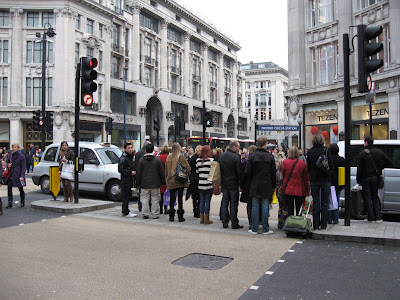 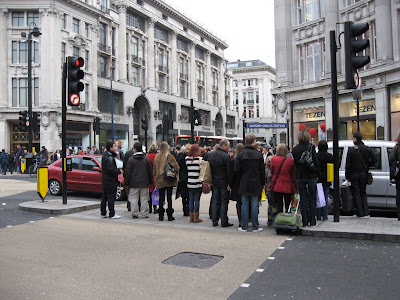 (Below) Regent Street. Why is one lane of Regent Street devoted to free black cab parking, when this very wide road is cycling-hostile, with no infrastructure? 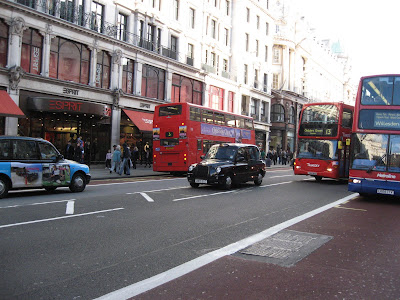 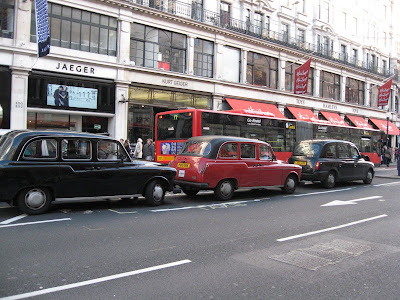 (Below) A couple of yob cab drivers park on the pavement on the double-yellow line 'no waiting at any time' section on Milton Road E17. 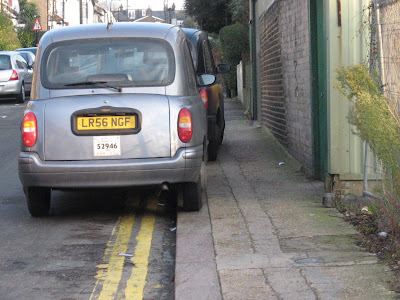 (Below) A lawless black cab driver who went into the ASL by Trafalgar Square enjoys the company of a yob motorbike cop who did the same. 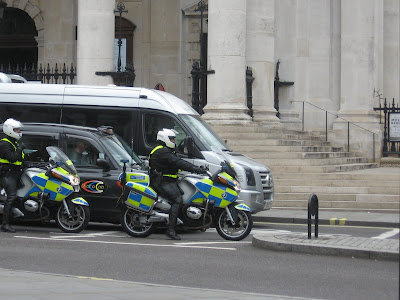 Posted by freewheeler at 07:43