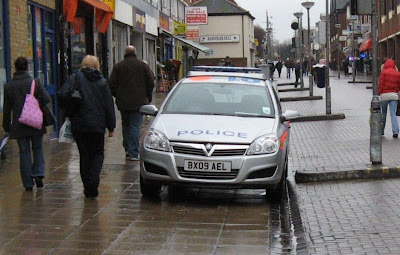 "Due to the fact that we believe you were involved in anti-social behaviour, ie taking photographs … then we do have a power under [the Police Reform Act] to ask for your name and address, and for you to provide it. If you don't, then you may be arrested."

There is a section of that act that compels a member of the public to give their details if a police officer suspects them of anti-social activity.

Patefield was arrested for refusing to give his details

Patefield was held for eight hours and released without charge.

See an interview with the photographer here.

In another recent case

An Italian student has described how she was stopped by police under anti-terrorist legislation while filming buildings, and later arrested, held in a police cell for five hours and given a fixed penalty notice.

When Bonomo was challenged by one PCSO, she said she was filming "just for fun". He replied: "You like looking at those buildings do you? You're basically filming for fun? I don't believe you."

The PCSO said she had been cycling the wrong way down a one-way street and threatened to fine her.

But cycling or driving the wrong way down a one-way street in London ceased to be a criminal offence early in 2009 and can only be dealt with by the local authority, which is empowered to hand out fixed penalty notices. A PCSO does not possess the power to ‘fine’ a cyclist for doing this.

(Below) On a recent trip to Hammersmith I spotted this car parked on the pavement on Shepherd's Bush Road. Under the windscreen it had a card identifying it as belonging to a police officer - presumably from Hammersmith police station, which is just up the road. What a ranker! 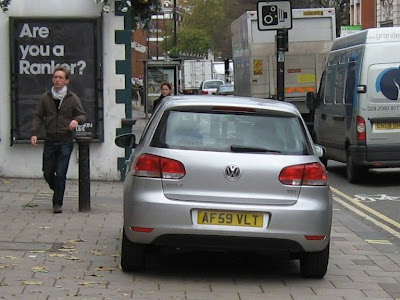