BBC TV Inside Out 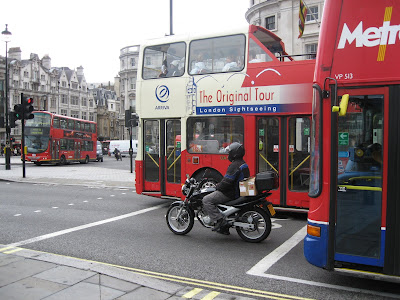 Advanced Stop Line for cyclists, on the south side of Trafalgar Square.


I watched BBC 1’s Inside Out last night. The gist of the section on cycling was that the capital is full of cyclists who don’t obey the Highway Code. The examples supplied struck me as fairly tame.

Its thrust was that cyclists must be made to obey the rules. But this is a fatuous aspiration since bad behaviour by cyclists is simply a response to streets which are profoundly hostile places for cycling.

In the first place it’s unreasonable to expect cyclists to obey the rules, when drivers don’t, when Advanced Stop Lines are not enforced, and when the car supremacist Met spectacularly fails in its duty of care towards vulnerable road users.

In the second place, London remains a backward car-centric city which privileges the car driver at the expense of the cyclist and pedestrian. Cyclists want to be safe and they want to get to their destinations in as convenient a way as possible. Car-centric streets put endless obstacles in the way of those desires and cyclists adapt accordingly. Pavement cycling and red light jumping are responses to the absence of safe, convenient infrastructure. Provide infrastructure on the Dutch model and cyclists won’t see any need to ride on the pavement or ignore red lights.

The programme treated us to the views of the Westminster councillor who is itching to see cyclists receive punitive fines. Yet in 2008 Westminster had the highest number of pedestrians, pedal cyclists and motorcyclists killed or seriously injured of any borough. That situation did not arise because some cyclists break the rules. Although the programme positioned cyclists as a major threat to pedestrians, it didn’t bother to examine casualty figures, which show that it’s overwhelmingly drivers who maim and kill London’s pedestrians.

Footnote. Check out Rob Ainsley's take on the programme.
Posted by freewheeler at 09:50