Not on BBC news 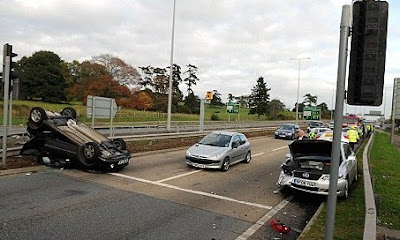 Sadly BBC News was unable to find space for this item:

Former BBC Director General Greg Dyke apologised to a 'terrified' family after he crashed into their car with so much force that it flipped on to its roof. The accident left two small children dangling upside down in the vehicle, which was written off when Dyke's silver Lexus hit the back of it.

Prosecutor David Burgess said: 'Dyke had not seen the Peugeot stopped at red lights and collided with the rear and it flipped on to its roof.'

Was the car wearing a yellow reflective jerkin and a helmet? No it was not. It was also a dark car. No wonder the court realised Mr Dyke cannot be entirely blamed for this unfortunate accident which could have happened to almost any driver.

Dyke was fined £600 and ordered to pay £75 costs and had six points put on his licence - which has three points on it already for a speeding offence in May 2008.
Posted by freewheeler at 13:22