British cycle parking at its finest is to be found at Leyton Mills retail park, which is accessed by the award-winning Orient Way cycle path, which won the prestigious London Cycling Campaign Best Cycle Route Award in 2001. This is one of two main shopping areas in Leyton, located at opposite ends of the High Road. A new retail park is to be found at Leyton Mills. This has a large Asda store, a B&Q store and a selection of furniture and electrical stores.

As you enter the retail park on the cycle path you can see in the distance the entrance to the giant 24-hour Asda. 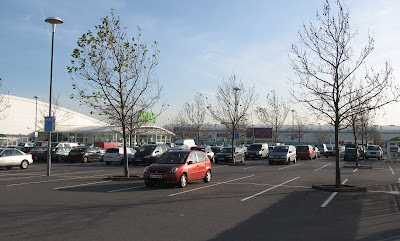 From the same point, swing the camera to the left and you can see, ahead of you at the end of the cycle path, the bike shed. This has been sited according to the essential design requirement of British cycle parking – to be as far away as possible from the entrance to the building it serves. This is for three reasons. Firstly, a bike shed near the shop entrances would take up valuable space which is much better devoted to car parking bays. Secondly, cyclists are generally much fitter than drivers and are therefore more suited to walking longer distances. Thirdly, as this shed demonstrates, almost nobody cycles to this shopping centre and so it’s a complete waste of money providing facilities which nobody is going to use. 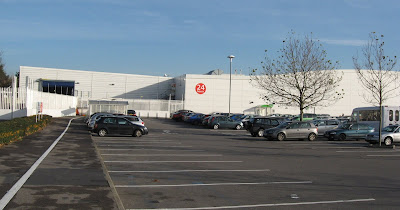 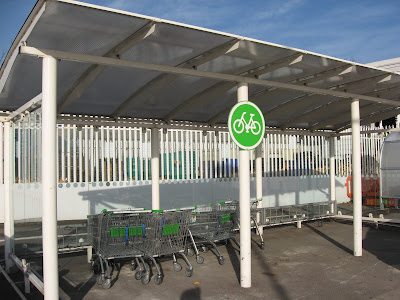 (Above) By siting the shed in a quiet corner and by using ‘front wheel only’ bike parking, bikes can be stolen more easily, by simply removing two wheel nuts. This can only be good for the economy, as it obliges the cyclist to purchase a new bike, thereby helping Britain to pull itself out of recession.

(Below) Sadly, there are some cyclists who are simply not prepared to use this magnificent facility and walk half a mile across a car park to shop at B&Q on the other side of the retail park. Instead they cycle to the far side of the car park, which is obviously very dangerous. Also by abusing a sign post in this way this cyclist has unambiguously demonstrated that cyclists are lazy, anarchic individuals who just aren’t prepared to follow the rules. How are cyclists ever going to win respect from drivers if they behave like this? 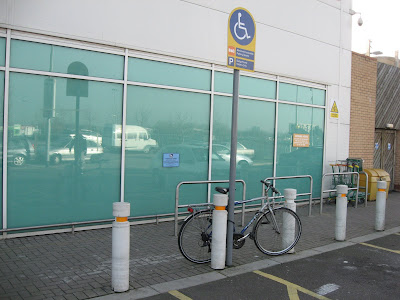 Posted by freewheeler at 08:33