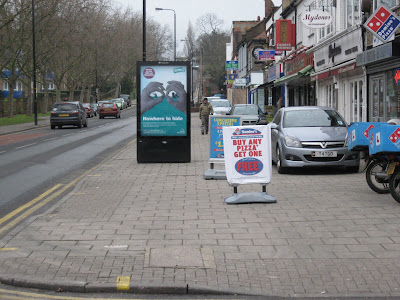 Here’s more bad news for cyclists, bus users and anyone who doesn’t use a car to travel around the London Borough of Waltham Forest.

Waltham Forest council has a climate change policy which, like its Green Charter, is essentially a worthless piece of trash. Today let’s take a look at one aspect of it:

Now, as always, let’s contrast the empty Green piety with the real world of council action:

TRADERS campaigning against plans to install a bus lane outside their shops are celebrating after the proposal was scrapped. Business owners in Chingford Mount Road were concerned the bus lane, proposed by Transport for London, would affect trade and worsen congestion problems.

The plan was to install a 50m bus lane between between Albert Avenue and Hall Lane, which traders said would increase congestion and reduce the amount of passing trade. Campaigners have now been told the planning application for the scheme has been withdrawn.

Cemal Arkut, owner of Suitability Dry Cleaners, who organised a 150-signature petition against the bus lane, said traders were delighted at the news. "It is really good news for us," he said. "The bus lane would have caused congestion and made people take a different route, which would have affected our passing trade.

"I'm glad that common sense has prevailed and the council has listened to us."

Although these traders are too ignorant to know it, they are cutting their own throats. Bus users won’t travel to shop on Chingford Mount Road if their bus takes forever to get there. The existing congestion isn’t caused by a bus lane, because there isn't one, it’s caused by car dependency.

I would make the effort to cycle and shop there but Chingford Road and Chingford Mount Road are hellish and deeply unattractive roads to cycle on, so I never bother. Pampering the lazy local who wants to drive a mile from home, park outside a shop, and zip into a shop to buy a packet of cigarettes, makes little economic sense because it ends up deterring other shoppers. In the end the congestion puts off even car drivers, who prefer to go to a large out-of-centre retail unit.

Local traders always love blaming their woes on things like parking restrictions, whereas the reality is that they lose out to the competition from much bigger firms who can sell the same goods more cheaply. That trend is accelerated in a recession.

Historically, small shopkeepers have always been gripped by the delusion that their survival depends on "passing traffic" and car parking right outside their shops. The earliest pedestrianisation schemes in Britain were bitterly opposed by local traders, terrified that a car free environment would destroy them. When it turned out that pedestrianisation resulted in booming sales, shopkeepers then started asking for it. Ironically so successful was pedestrianisation that the concept was appropriated for car drivers in the form of the shopping mall – an artificial high street indoor retail centre with parking for hundreds of cars. Shopping malls then proceeded to suck the life out of many local shops in the area. Butchers, fishmongers and greengrocers are often among the first to go, followed, in the end, by all those quirky little family-run shops selling anything and everything.

Chingford Mount Road (shown in the photographs above and below - it's not exactly buzzing with pedestrians) provides a classic example of a car-sick shopping centre. The wide pavements are either crammed with clutter, or used for car parking. It’s a deeply unattractive road to cycle on because of the volume and proximity of traffic. No cycle counts are ever taken on it, of course, because no one involved locally in promoting cycling is interested in recognising failure or addressing it.

I’m sure that the shopkeepers of Chingford Mount Road have never heard of Groningen. I doubt if car-friendly Councillor Chris Robbins or Councillor Bob Belam have either. Which is a shame.

The economic repercussions of the programme repay some examination. Since 1977, when a six-lane motorway intersection in the city's centre was replaced by greenery, pedestrianisation, cycleways and bus lanes, the city has staged a remarkable recovery. Rents are among the highest in the Netherlands, the outflow of population has been reversed and businesses, once in revolt against car restraint, are clamouring for more of it. As Gerrit van Werven, a senior city planner, puts it, 'This is not an environmental programme, it is an economic programme. We are boosting jobs and business. It has been proved that planning for the bicycle is cheaper than planning for the car.' Proving the point, requests now regularly arrive from shopkeepers in streets where 'cyclisation' is not yet in force to ban car traffic on their roads.

There are signs of hope. Public policy guidance is changing.

I can only reply: not round here it ain’t. There are no signs of hope at all. The public policy guidance may be Green but it bears no relationship at all to decision-making.

Things are getting worse not better. And yet outer London is where the great future surge in cycling is supposed to take place.

Here in Waltham Forest the Council is (i) extending pavement parking (ii) moving cycle lanes to create parking bays, in the process narrowing roads, leaving cyclists to cycle a narrow corridor between parking bays and traffic on A roads (iii) freezing the parking permit charges on second and third cars (iv) telling motorists not only where Smart Car CCTV enforcement of traffic offences will be situated but also what times they’ll be there (v) capitulating to a handful of shopkeepers who didn’t want a bus lane.

Car dependency as usual, in short, promoting congestion and climate catastrophe, and suppressing cycling, walking and bus use.

Tory MP for Chingford Iain Duncan Smith is thrilled to see the last of this proposed bus lane.

"This is fantastic news.

He also gave the traders advice on approaching the council about other concerns they have, including a lack of parking spaces.

That's right, Iain. There are still a few scraps of local pavement which haven't yet been turned over for car parking. But I'm sure the Council is working hard to resolve this awful discrimination against fossil-fuel addicts.

(Below) Who'd ever want to go shopping in Groningen when instead you can wander the delightful pedestrian-friendly streets of Chingford? 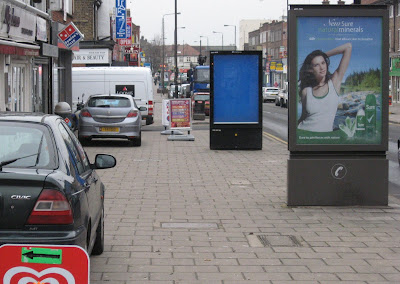