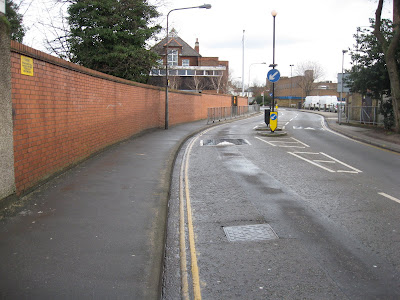 Cycling campaigners are always arguing that cycling is much safer than people think it is, and they love citing road casualty figures which “prove” it. I’ve never liked that argument because casualty figures don’t reflect the extraordinary number of crashes which drivers have which don’t involve injury, which are only registered statistically in insurance claims.

In other words, the vulnerable road user’s exposure to risk is what really matters. If the collision is not the cyclist’s fault, then the chance of being in a crash can be quite arbitrary. There are a lot of very bad, reckless drivers out there, and whether or not a cyclist falls foul of them can simply be a matter of being in the wrong place at the wrong time. And even the argument from statistics is open to scrutiny:

Compared with driving, cycling now has a risk 12.7 times as large per km travelled, when it was just 9.3 times as risky in 1981. So, to answer the question posed at the top, cycling in Britain is now safer overall than it used to be, but it's less safe than it used to be relative to driving.

Yesterday I was cycling along Mission Grove E17, approaching the traffic island shown above. It's on a bend. As I did so I could hear a car coming up behind me. Sure enough, instead of anticipating the narrow gap between the traffic island and the kerb and slowing, the driver of the car accelerated past me.

What I hadn’t anticipated was that there was another driver behind the first one, also determined to get past a cyclist. So I had a moment of blind terror as I slammed on my brakes as a large blue car overtook, then swerved in front of me to get through the gap. It’s the kind of bad experience that cyclists with headcams post on YouTube.

I jotted down the registration number: V91 JGW. Just another of London’s yob drivers showing a reckless disregard for the safety of a cyclist, and prepared to maim or kill simply out of a moment’s impatience. You could argue, of course, that there’s safety in numbers, and that if I’d been in the company of other cyclists a driver would not display impatience and a reckless desire to overtake several cyclists at an unsuitable location. If you believe that then you have a short memory.

Afterwards I cycled back and took a snap of a car of similar dimensions driving past the traffic island. It shows just how little space there is for a car safely to overtake a cyclist at this point, yet that is precisely what many drivers are prepared to do.

What is to be done? You can go down the orthodox route of asking for more niceness and mutual respect among road users. Or you could completely re-engineer this road to provide segregated cycle lanes and make this a slow, inconvenient route which only those drivers needing essential access would use. There are no prizes for guessing which is my preferred option. 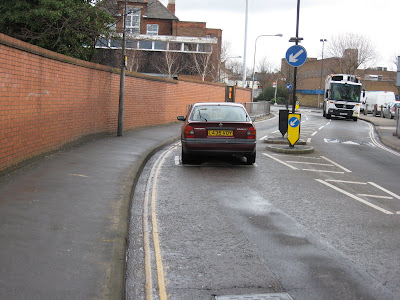 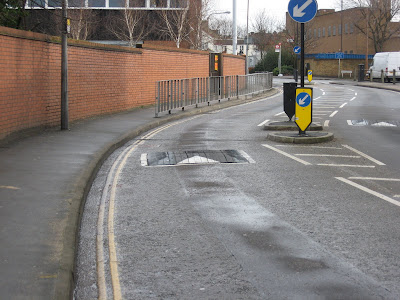 Posted by freewheeler at 10:34