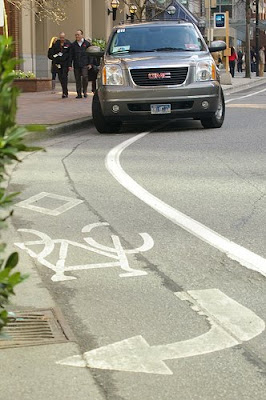 I think this photo pretty well sums up VANOC's approach to the sustainability at the 2010 Olympic Games in Vancouver.

GM has supplied over 4,000 vehicles for VANOC to use for the 2010 Winter Olympics. They can be seen parked in several large lots in Vancouver and Whistler. Almost all of the vehicles are SUVs. Yes, a few are hybrids and there is one fuel cell vehicle, but most are just regular gas guzzling SUVs.
Posted by freewheeler at 11:07