Kill a cyclist, get just a 2 year driving ban 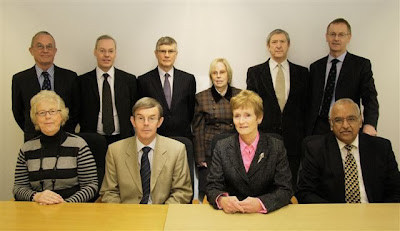 The buck stops here. The Sentencing Advisory Panel, an establishment body made up largely of high-income professionals from the field of law and policing. I wonder how many of them are cyclists?

A TEENAGER has been jailed for causing the death of a cyclist.

Katie Hart, 19, has been sentenced to 21 months in prison, of which she was told she would serve half.

Hart was also banned from driving for 24 months at Huntingdon Law Courts today.

She was found guilty of causing the death of Maj Gareth Rhys-Evans by dangerous driving last month.

In other words, she received the absolute minimum driving ban for this offence.

The problem is that although RoadPeace has been a very effective campaigner in getting tougher legislation introduced against killer drivers, the impact of legislation is subsequently diluted by the Sentencing Advisory Panel. I can’t help wondering how many fossil-fuel addicts serve on this panel, what the extent of their car dependency is, and if any of them have convictions for motoring offences.

Let the last word on this topic go to RoadPeace:

According to the last SAP guidance on Causing death by dangerous driving, license disqualification was intended to be forward looking and preventive, not backward looking, i.e. punitive. It also argued that drivers may be tempted to drive while disqualified if their bans were lengthy. RoadPeace found both these arguments deficient and believes the issue of disqualification is long overdue for review.

While the judicial establishment is very relaxed about road carnage, woe betide anyone who nicks cars. Stealing expensive cars is a very, very serious offence and is punished accordingly:

Pilvinis targeted homes with expensive cars such as BMWs, Audis and Range Rover Sports left out on driveways.

Between December 2008 and June 2009 he struck at properties in Surrey, Sussex, Thames Valley, Hampshire, Kent, Essex, Cambridgeshire and Northamptonshire, stealing an estimated £538,000 worth of cars.

[That sounds a lot but it could just mean nine cars or less.]

He was jailed for seven years at Guildford Crown Court after pleading guilty to 17 offences over a seven month period.
Posted by freewheeler at 09:31