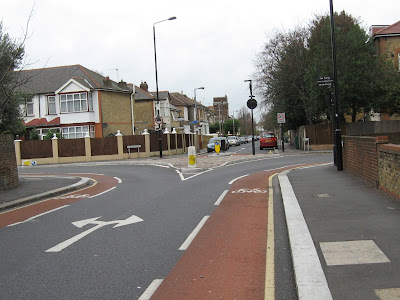 If you are cycling north along High Road Leyton there comes a point where you are forced to peel off on to Grange Park Road, because of a triangular one-way gyratory system. After a hundred metres or so you meet the A1006, which cuts across in front of you (shown above). On the other side of the A1006 Grange Park Road continues in a straight line, forming a designated part of the London Cycling Network (see first photo below). Grange Park Road continues, still in a straight line, linking up with the contraflow lane on Manor Road, which connects to Lea Bridge Road (A104). In short, a major cycling route - or at least one with the potential to become one, since it offers the possibility of a direct and straight alternative to cycling north or south along hellish Church Road, or unpleasant High Road Leyton.

There's just one problem. The traffic island blocks access to the continuation of Grange Park Road. Cyclists are physically denied access to a recommended and signed cycle route. Transport planning doesn't get any stupider than this. And that's why this blog exists. To demonstrate that cycling in outer London is going precisely nowhere. 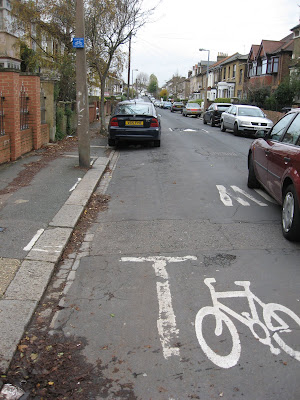 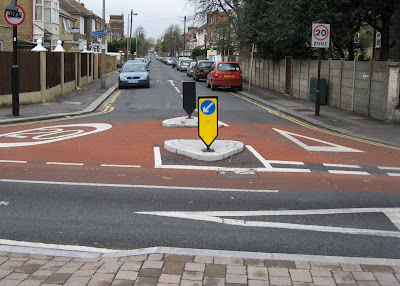 (Below) The absurd anti-cycling infrastructure works against cyclists approaching from both directions. This cyclist has chosen to disregard the LEFT TURN ONLY sign at the junction of the A1004 and southbound Grange Park Road, preferring to cut across the traffic island. To understand why see the second photo below. 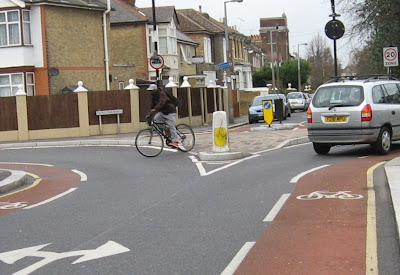 (Below) Cyclists heading south on Grange Park Road who want to turn right on to the A1006 are here directed left on to the gyratory system. But no cyclist is going to bother to cycle a considerable distance on an unpleasant two-lane one way gyratory system simply in order to come back to a point which is just the other side of the traffic island. This is an absolutely classic example of car-centric transport planning which totally disregards the interests of cycling. 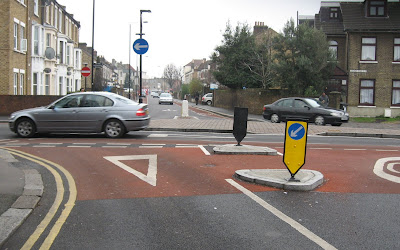 Posted by freewheeler at 07:40