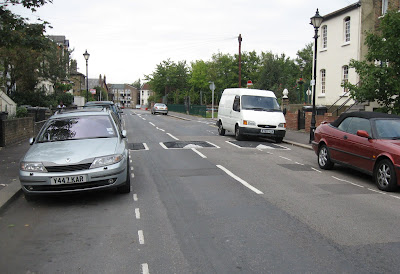 Most UK cycling blogs celebrate the good things about cycling and are optimistic about the future of cycling. This blog specialises in crap and aligns itself with full-bodied pessimism.

The point about the sort of crap featured on this blog is that I believe it suppresses cycling. I don’t think cycling is going anywhere in London and I don’t think optimists are doing the prospect of mass cycling any favours. Not as long as the transport infrastructure continues to put the car before the bicycle.

A local example. East Avenue, Walthamstow, shown above. For starters the road is dedicated to parking bays along both sides. This narrows the road so that cyclists are either faced with oncoming traffic coming unpleasantly close, or are overtaken by passing traffic coming unpleasantly close. To make matters even worse, the clowns in the Council’s highway engineering department have laid rubber speed cushions along this road. A basic objection to rubber speed cushions is that they are ineffective traffic calming devices. They are supposed to slow vehicles to 20 mph, but don’t. You can thunder over them in a 4X4 at any speed you want to. But even worse, these car-driving transport planners have laid the cushions in rows of three, with the middle one straddling the dashed white line down the middle of the road. The result? Drivers aim to get their wheels to pass through the gaps between the speed cushions. Which means for a cyclist that drivers come thundering towards you on your side of the road. Few drivers seem to understand that when they veer over into the other lane whoever is using that lane has priority.

The first thing that needs to be done on East Avenue is to strip away those speed cushions. Next adopt the radical approach seen in the Netherlands and Denmark and get rid of all the parking bays on the western side. Then use the space to build a segregated cycle lane on the Dutch model.

Do that and do it elsewhere and you’ll see a genuine surge in cycling. But if you accept the existing condition of streets like East Avenue and simply try and market cycling as cool and sexy, I think the strategy will fail. But then existing strategy seems to have failure built into it, judging by the Mayor’s stunted ambition. As this blogger rightly observes

aiming for cycling to be just 5% modal share of all traffic by 2026 is less like a velorution and more like a wet Wednesay matinee of Les Miserables.

Alas, optimism then seeps in:

2010 does stand to be a record year for cycling in London. Transport for London, under the stewardship of Mayor Johnson, will launch 6000 new bikes onto our streets with the launch of the Zone 1 bike hire scheme. The first two of 12 ‘cycle superhighways’ (essentially existing cycle lanes re-painted and re-branded to raise their awareness) will open to the general public. The cycling budget for the next five years is a fairly hefty £110 million pounds.

There’s nothing wrong with the bike hire scheme in principle, but let’s not get carried away.

The most optimistic estimates of their use say they will each be used 10 times a day. That's 60000 cycle trips per day (and is somewhat optimistic based on the take up of other shared bike schemes).

This may sound impressive, but the greater London area has around 8 million residents. In most places, people make an average of around 2.5 "trips" by all modes each day, so that's around 20 million trips per day in total. If we assume that the bike hire scheme really does reach the number of trips that its proponents say, this means it has a capacity to replace one in 400 trips. 0.3% of the total. And that's the best case if they complete the scheme.

That's tiny. Barely a start, in fact. Where people really cycle they use their bikes an awful lot more than that.

As for the Cycle Superhighways. Painting 1.5 metre cycle lanes blue is not going to get non-cycling Londoners rushing to try out cycling.

And as for £110 million for cycling in Greater London over five years, that’s not a “fairly hefty” budget, it’s peanuts. And how much of that money will go on infrastructure, and how much will be drained away by futile promotions and marketing stunts?
Posted by freewheeler at 08:25