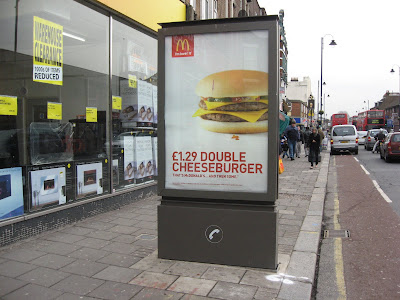 It seems like only yesterday I was mocking the London Cycling Campaign for its delusional faith in policy statements which bear no relation to the real world. This, for example:

The recent National Obesity Strategy and National Institute of Clinical Excellence guidance on physical activity and the environment all recognise the need to put people and planet back at the centre of transport and spatial planning.

And now the plot thickens.

Remember this, which just before Christmas I spotted had sprouted on the pavement on Leyton High Road? 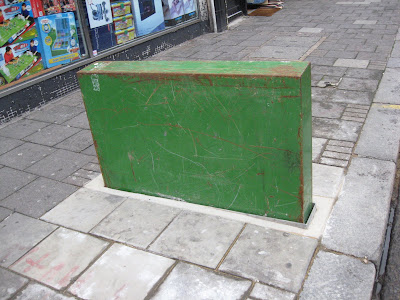 Its twin subsequently popped up in Barkingside High Street. And now the mystery is solved. It turns out to be the base of a British Telecom advertising panel. BT is putting them up all over London. They have a phone on one side and a large advertising panel on the other.

Why, in the age of the mobile phone, is BT enthusiastically installing thousands of these panels all over London's pavements? Because they can make money selling advertising space. Nobody uses these devices to make telephone calls, it’s just an easy way of turning the pavement into a commodity. Something which the London Borough of Waltham Forest is equally guilty of.

These panels are ugly and obstructive, and they are a further sign that nobody in national or local government really gives a toss about walking or pedestrians, let alone the aesthetics of the urban environment. As far as those in authority are concerned, the best possible uses for a pavement are (i) signs and other street furniture (ii) car parking (iii) advertising panels.

What’s this got to do with the LCC and the National Obesity Strategy? Take a look at what this new panel on High Road Leyton is advertising. It rather underlines the way ‘the recent National Obesity Strategy and National Institute of Clinical Excellence guidance on physical activity and the environment’ mean diddly squat to anyone concerned with transport and spatial planning in an urban environment.

Let's say it again: for pedestrians and cyclists in the London Borough of Waltham Forest the walking and cycling environment continues to get worse, not better. We're busy going backwards.

The striking thing about places like Groningen, Amsterdam, Utrecht, Assen and Copenhagen is how the cycling infrastructure is paralleled by clutter-free pavements. Whereas London’s pavements are an obstacle course of metal crap, signs, panels, boards, parked motor vehicles and numerous other hindrances to pedestrian flow. British cities are unfriendly places for pedestrians and cyclists. And this crap new panel is aimed at passing drivers. 'Ghost bikes' are removed by some local authorities on the grounds that they are a distraction to drivers; advertising panels, by contrast, are regarded with indulgence.
Posted by freewheeler at 12:29