Gridlock on the London Cycle Network 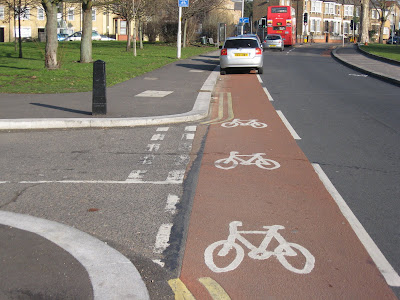 This episode shows just how crap the so-called London Cycle Network is, and the failure of the 'vehicular cycling' approach (i.e. cyclists sharing the roads with motor vehicles and with cycling infrastructure which is unsegregated rather than segregated). The scene shown above is the B159, Leyton Green Road, heading north from High Road Leyton to meet the junction with the A104, Lea Bridge Road. Blue signs indicate that this is a route on the London Cycle Network. At the junction (where the doubledecker red bus is in the pic above) a blue sign invites cyclists to take 'the quiet route to Walthamstow'. And after cycling along the B159 you may well feel in need of some tranquillity to calm your shattered nerves.

I paused to take the above snap of the refurbished cycle lane, which is now wider and pinker than before. There's a problem though. Apart from where those double yellow lines protect the side road entrance, you can park in the cycle lane along the entire length of this road, and so people do. Up ahead the cycle lane is obstructed by a silver Toyota Corolla. In front of it there's a parked Black Polo. Just two cars. And now see what happens. I've no sooner put my camera away and pedalled across the entrance to that side road, than it's time to get the camera out again.

(Below) Traffic backs up at the red light, including at the end that white car which hasn't quite managed to squeeze past the first of the two parked cars. Note that a red bus is approaching in the opposite lane. The car which has overtaken me blocks me in, but then there wouldn't be much point in trying to squeeze past as I wouldn't get between the white car and the parked Polo. Now see what happens. 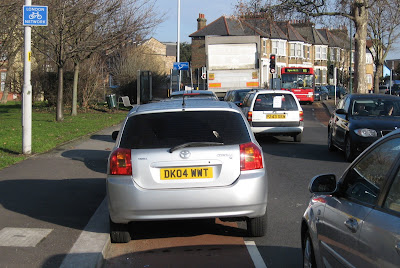 (Below) The approaching bus comes to a standstill because the driver can't get through the gap. As long as the lights remain at red those bus passengers aren't going anywhere. 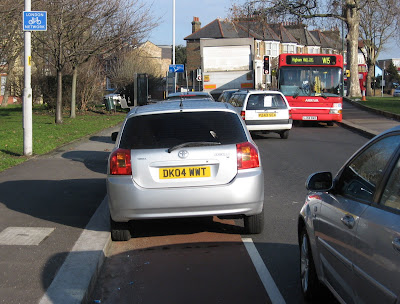 (Below) The first of the two cars parked in the cycle lane, with the bus still stationary. Gridlock! And this is the future of London. A transport culture which is going nowhere, because catering for car parking is the number one priority. It's utterly absurd that anyone should be allowed to park here, but you won't find anyone saying so. The transport planners of Waltham Forest are completely obsessed with finding more on-street car parking and there is no political restraint since the three main parties are all keen to ingratiate themselves with the vocal motoring lobby. 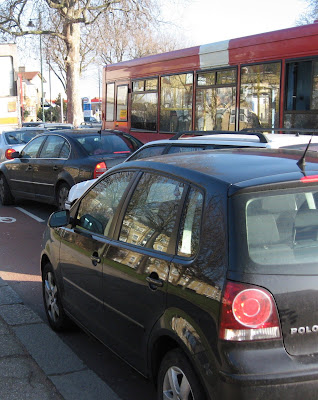 (Below) Just beyond the two cars parked in the cycle lane is this lorry. Professional cycling campaigners blather on about the need for better education for lorry drivers to make them more aware of cyclists. But the problem here isn't whether or not the driver is good or bad, the problem is the lorry. You can't blame the driver for drifting into the cycle lane because the narrowness of the road means he doesn't have a choice. The absurdity is putting in a cycle lane on an unsuitable road, allowing drivers to park in it, and then expecting cyclists to share it with lorries. To boast that this is a recommended cycle route and part of the London Cycle Network just underlines how feeble are the results of decades of cycle campaigning.

And you wouldn't want to overtake this lorry on a bicycle, because it is turning right. It would be possible to undertake it in the cycle lane, but this might be regarded as inadvisable. Why do so many London cyclists take to the pavement when they have a lovely network of signed cycle lanes? It's a mystery. 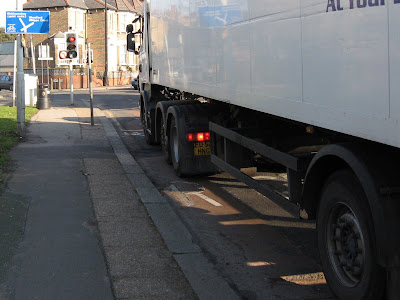 Posted by freewheeler at 08:52