Another day of vehicular cycling in London 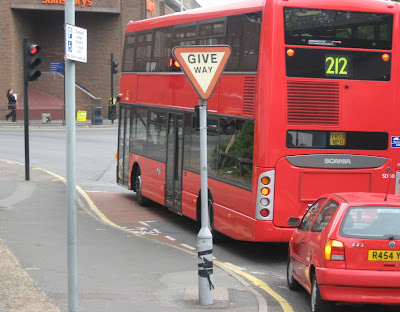 At this major junction vehicular cyclists enjoy the extra protection afforded by a pink Advanced Stop Line and a generously wide pink cycle lane, helping to guard against the danger of being hit by a left-turning vehicle.

Crikey, some days I forget that 2010 is London’s Year of Cycling, with a cycle revolution taking place in the capital!

And yes, that bus driver overtook me and with the traffic light already at red, drove straight into the ASL. Junction of South Grove E17 and Selborne Road.

Top priorities in the ‘Year of Cycling’ include

Reducing cyclist casualties, in particular collisions between cyclists and HGVs.

That’s not working out so well, is it, with four London cyclists crushed to death by lorries this year so far, the last one last Saturday, and a woman cyclist under a lorry at Highbury Corner on Tuesday, who seems to have lived but who may well never cycle again.
Posted by freewheeler at 08:32