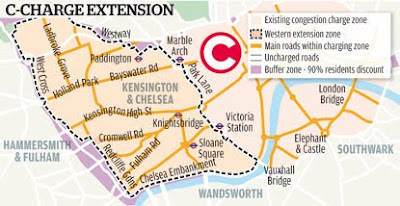 Who can doubt that cycling in London will continue to increase under our enlightened cycling Mayor?

Park Lane will once again be its western boundary, instead of the Shepherd's Bush roundabout. At a stroke, almost the entire borough of Kensington and Chelsea will be removed from the zone.

But the move will cost Transport for London £55 million a year in lost revenue and congestion and air quality will worsen in west London. There are also concerns about an increased danger to cyclists.

Val Shawcross, a Labour member of the London Assembly, said: “It's hard to see who wins from this. Cyclists, bus users and local residents will all suffer from more congested roads and dirtier air while TfL will throw away millions in valuable revenue at a time of financial hardship.”
Posted by freewheeler at 08:13