The ‘safety in numbers’ delusion 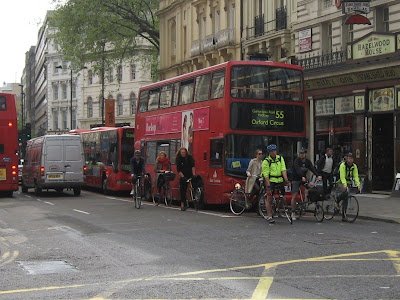 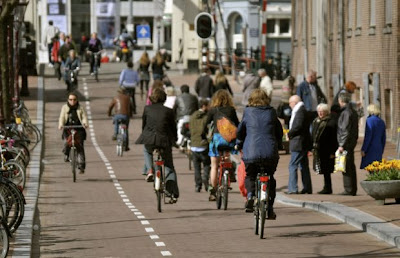 Cycling in London and cycling in Amsterdam.

THE MORE OF US THE BETTER IT IS! trills the Cyclists’ Touring Club, an organisation which is a major obstacle to the development of mass cycling in Britain.

Cycling gets safer the more cyclists there are.

In fact that conclusion is without any evidence to support it.

The CTC extrapolates a bogus conclusion from the fact that

Countries in Europe with high levels of cycle use tend to be less risky for cyclists.

There’s a simple flaw in the CTC’s argument, which is that safety has nothing at all to do with numbers and everything to do with safe cycling infrastructure. Even if only one person was cycling on that street in Amsterdam (I’ve lifted the photo from Amsterdamize) it would still be a lot safer than New Oxford Street, shown in the first photo. It’s the infrastructure, stupid.

Instead of demanding cycling infrastructure with a proven record of success, the CTC blindly pursues its vehicular cycling dogma:

We want to halve the risk of cycling by doubling the numbers.
How do we do this?

By tackling the fears which prevent people from cycling more:

In short, garbage. The kind of crap which has failed to develop a mass cycling culture in Britain and will continue to suppress it until such time as Britain’s cycling campaigners wake up to the spectacular extent to which the vehicular cycling strategy has failed. Telling people their fear of cycling is unreasonable is both patronising and pointless. It’s also quite simply wrong. Reliance on the myth of "safety in numbers" will not make cyclists safe on unsafe roads.

Attempting to ameliorate the cycling-hostile environment of Britain’s roads by ‘improving driver behaviour’ is even more farcical now that we have a Conservative government which is explicitly on the side of the reckless, lawless driver. Tories hate average speed cameras for the simple reason that they are effective, unlike standard Gatso speed cameras, which you simply have to brake for, before accelerating again.

And lastly, marketing. It’s hardly surprising that both the CTC and LCC are enraptured by marketing and promotion. In the absence of concrete demands for infrastructure, we are offered celebrity cycling and pointless initiatives that change nothing.

What’s needed is first of all for cycling campaigners to recognise the reason for the failure of cycling in Britain, then take back control of the CTC and the LCC from the inflexible ideologues who control these organisations. Change is only going to come from below and cyclists only have themselves to blame for putting up with the intolerable conditions they face in the transport culture of car-centric car-sick Britain.

(Below) Note that the first cyclist is going the wrong side of the KEEP LEFT island. Don’t blame the cyclist; blame the cycling-hostile environment of central London. 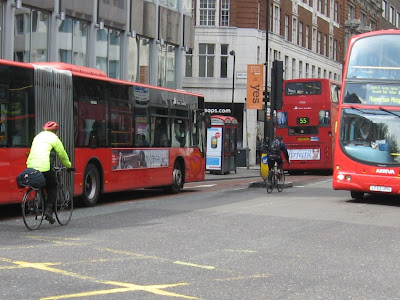 Posted by freewheeler at 13:50