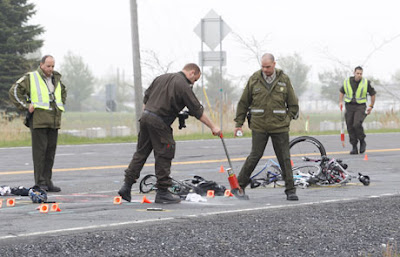 About once a month, somewhere in the vehicular cycling world, a driver manages to drive straight into a group of cyclists, with devastating consequences. It’s probably only a matter of time before it happens somewhere in central London. The latest cycling massacre occurred in Montreal:

Three female members of the Club de Triathlon St. Lambert died after a collision with a pickup truck yesterday.

[Note that once again a lazy journalist with a car supremacist consciousness applies the act of colliding to the cyclists, not the killer driver]

The three other cyclists in the group - two women and a man - were seriously injured but were expected to survive. Hours after the 10 a.m. crash, police officers were still picking through wreckage stretching across about 40 metres of the highway - bike wheels, water bottles, gloves, glasses and shoes. Three bikes were badly mangled.

It appears the group was cycling in single file on or near the right-hand white line on the paved part of the highway, near the shoulder, said Sgt. Claude Denis of the Sûreté du Québec
Posted by freewheeler at 14:25