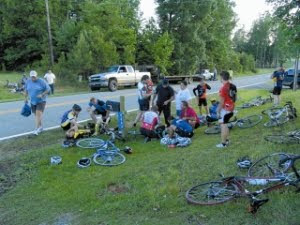 Bikes and bodies were strewn across his yard, Wonnacott said.

The N.C. Highway Patrol charged Daniel Burton Wilson II, 21, of 325 Sand Road in Rockwell, with six counts of felony hit and run. Authorities say Wilson turned into the cyclists and struck six, dragging one underneath his Nissan Pathfinder.

The Cabarrus County District Attorney's Office is determining "if this guy was trying to intentionally run over the cyclists," Barger said.

The first Comment under the story is a characteristically cyclophobic one:

hammer wrote:
They shouldn't allow these bikes on the road !
Posted by freewheeler at 12:18