How the London Cycling campaign dresses up failure as success 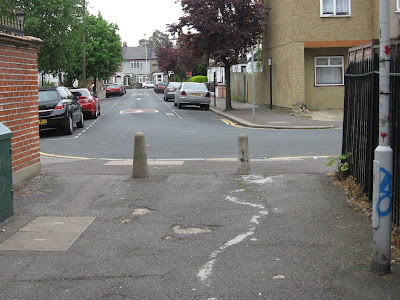 Recently the main London Cycling Campaign website has carried this on its main page:

Lobbying by the Waltham Forest Cycling Campaign is opening Lloyd Park to cyclists.

In its sixty year history of local authority control, not one cycle stand has ever been installed in Lloyd Park, the most popular park in the borough and home to the internationally famous William Morris Gallery, which likewise has not even one cycle stand. In its twenty year existence the local LCC group ('Waltham Forest Cycling Campaign') has done precisely nothing about this dismal state of affairs.

Last year the park was given lottery money for a radical revamp. This included expanded car parking in the park, with the development of an existing car park. Having scrutinised the plan, I immediately got in touch to ask why no cycle parking was shown. The response was that there would be cycling parking. But nobody could say where, or what the provision would be. Unlike the expanded car parking, no serious consideration had been given to cycle parking. It was literally an afterthought.

Cyclists are currently banned from the park. In one sense this is reasonable, since there is very little demand for north-south cycling through the park, and cyclists already have use of a far more strategic east-west route which cuts through the park. This is also the busiest park in the borough, where people take small children to play. In practise, anyone who wants to cycle in the park does so, since there is no one to enforce the ban. You very occasionally see an adult riding through the park but this is rare, mainly because few cyclists want to start or end their journey on Brettenham Road E17 or Cazenove Road E17.

There's no reason why leisure cycling routes shouldn't be introduced in the park, of course (though it's far too small a park to make it a special destination, especially with the off-road routes along the Lea Valley not very far away). But cyclists need to be kept away from conflict with pedestrians. Good cycling infrastructure could and should be created around the perimeters of the park. But this isn't something the representatives of the London Cycling Campaign have asked for. Instead we get the cheap, lazy, friction-creating option of 'shared use'. No cycling campaigner should ever embrace 'shared use', which is just a way of creating cycling infrastructure on the cheap, at the expense of pedestrians. Unfortunately Waltham Forest Cycling Campaign shares the same stunted vision as its parent organisation. Its collaborationist policies are a gift to car-centric transport planning. 'Shared use' cycle paths can be found across the borough: they provide no real benefits for cyclists but are a gift to car-centric planning which seeks to remove cyclists from the road and dump them on to pedestrian infrastructure.

Waltham Forest Cycling Campaign (WFCC) successfully lobbied to get several paths in the park redesignated as shared use for cyclists and walkers.

The routes include the vital 'Clay Path' through-route, used by cyclists avoiding the perilous Forest Road and the convoluted one-way system to the north of Lloyd Park.

Clay Path has always been a permissible route for cyclists, so in no sense has it been 're-designated'. And Clay Path is a problematic route, because the access road at its eastern end (shown in the first photo above and the two below) was recently made one-way. If you want to access Clay Path from the A112 along Bedford Road you can't, because it's now NO ENTRY: 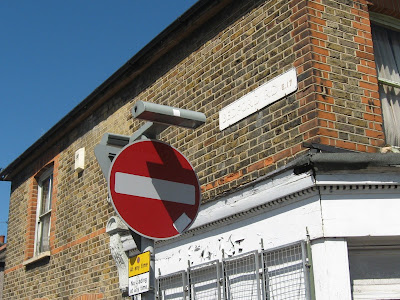 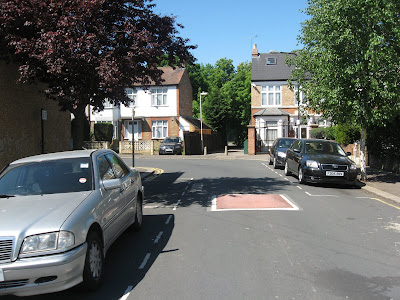 (Above) The entrance to Clay Path directly ahead. But no access for cyclists, because on-street car parking and the management of motor vehicle flow is a greater priority than safe, convenient cycling infrastructure.

Worse, Bedford Road even has new speed cushions, of the sort that encourage drivers to swerve to avoid them. On its website Waltham Forest Cycling Campaign claims that the council no longer installs speed cushions in deference to its lobbying. This simply illustrates how out of touch the group is and how little local cycling it does, since the council continues to install them.

The exaggerated claims of these cycling campaigners are even more peculiar considering the fact that at the 21 April Planning Committee meeting officers invited councillors to consider the option of closing Clay Path.

Naturally at the same time as proposing to close a public footpath, the officers were keen to expand car parking in a second area, or as they euphemistically put it:

Re-organising car parking to the east of the Gallery.

Clay Path is a fenced, dedicated strategic walking and cycling route which crosses Lloyd Park from west to east, between Winns Avenue E17 and Bedford Road. It’s a very important route for local residents. Naturally it’s in a grubby, neglected condition, because walking is not important to Waltham Forest council.

Clay Path is a public footpath but cycling is permitted on it. The fact that an officer can produce a report proposing its possible closure tells you all you need to know about the council’s car-mad officers, their contempt for walking and cycling, their indifference to climate change strategy and their confidence that their lunatic ideas will receive a warm welcome from the car-dependency- promoting councillors of Waltham Forest.

In the end the committee decided to half-close it,

as in stick a gate at either end and lock it up from as early as 4pm. 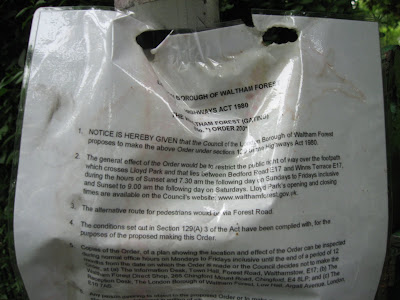 A crumpled traffic order (shown above) was posted to that effect, to the dismay of one regular local user who noted that

Unlike the CPZ Parking Consultations, where all houses in the affected area got letters and A3 colour posters were attached to every lampost, this time only a handful of letters were posted. And certainly not to my house anyway, and I live pretty near the park.

Well obviously. The council takes the views of car owners very, very seriously. But it is contemptuous of walking and cycling, and continues to neglect them. It neglects public footpaths, allows them to become obstructed, and repeatedly tries to shut them down.

Objections to the proposed gating have been registered and the council has not yet reached a decision. Given its contempt for walking and cycling, no one should feel too hopeful about the council’s impending decision.

(Below) The entrance to Clay Path from the western end. There is no signing to indicate where it leads and the name of the path is concealed behind overgrown vegetation. A typical Waltham Forest right of way in a local authority which is contemptuously indifferent to such walking and cycling networks that currently exist, and which are constantly under attack from car-centric planning. 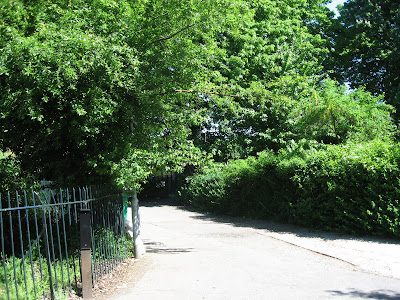 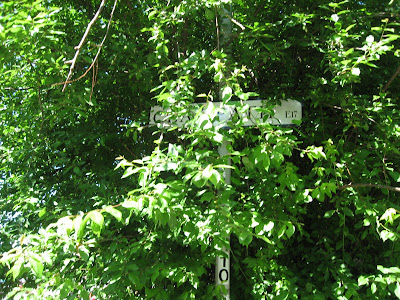 What cyclists need are a reconstructed Clay Path which is widened through the park and runs in a straight line between Bedford Road and Winns Avenue, and Dutch-style infrastructure on the Bedford Road-A112 link and along Winns Avenue. Provide that and you make cycling convenient, fast and safe, which is what you have to do if you really want to see mass cycling. Clay Path could form the spine of a direct, major cycling route running all the way from the B179 via Tavistock Avenue and Queen Elizabeth Road to Bedford Road. But Waltham Forest Cycling Campaign is a major obstacle to the development of mass cycling locally, entirely lacking in vision and content with crumbs.

All this magnificent campaigning victory boils down to is the introduction of some 'shared use' signs in a park which is surrounded on all sides by cycling-hostile streets which are dedicated to car parking and the management of motor vehicle flow. With cycle campaigning of this calibre cycling is going nowhere in Waltham Forest, and cycling’s modal share in the borough will continue to flatline at one per cent.

(Below) Winns Avenue E17. The scope for Dutch-style infrastructure is obvious on this very wide road. But local cycling campaigners aren’t asking for it. 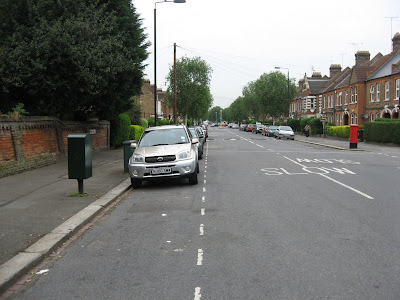 (Below) Winns Avenue leads on to this lethal junction with a mini-roundabout. This is a classic example of poor cycling infrastructure. Cyclists who want to cycle in a direct line across Higham Hill Road and on along the brief section of contraflow on Queen Elizabeth Road opposite are expected to pedal round the roundabout, turn right, then take a ninety degree turn left into the one-metre wide contraflow. Any cyclist with right of way from Winns Avenue is at risk of being run down by drivers who come speeding along Higham Hill Road from either direction, indifferent to anyone emerging from Winns Avenue. Mini-roundabouts are intrinsically hostile to safe cycling. 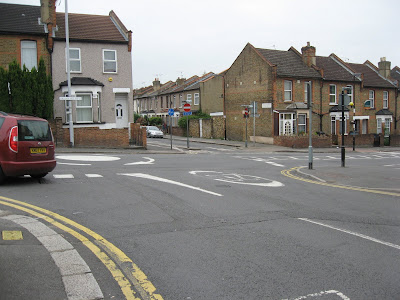 (Below) Incredibly, the Waltham Forest Cycling Campaign actually embraces this lethal junction as an example of good practice. This is taken from the group's Movers & Shakers document. It's another reminder that one of the biggest impediments to the growth of mass cycling in Britain are people who call themselves cycling campaigners. 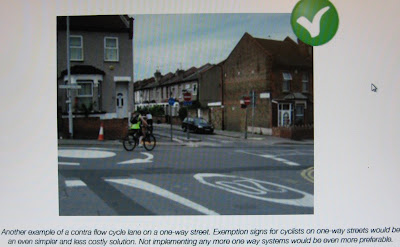 Posted by freewheeler at 08:17