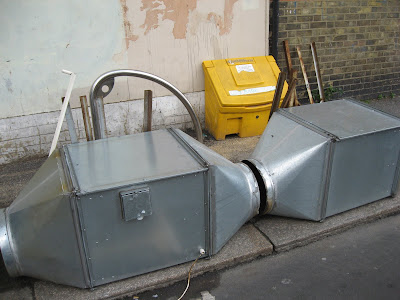 Do extra-terrestrials cycle? Powerful new evidence that advanced civilisations are fully committed to cycling emerged this week when a space craft landed by the cycle stand on Vernon Road in central Walthamstow.

‘The only possible reason an advanced species would want to visit Walthamstow are for its fabulous cycling facilities,’ an excited Leader of the Council, Chris Robbins, told reporters today. And a Transport for London spokesman added: ‘Cycling by extra-terrestrials in London has increased by 160 per cent since 2007. As word spreads throughout the galaxy about our legendary Cycle Superhighways, we fully expect to see one in five journeys through outer space made by bicycle by 2025.’

Reports are coming in that four extra-terrestrials on bicycles have collided with a 4X4 in an accident. More news when we have it.

‘Motorist’ 12.43 pm
Good point Jack. I am shocked by the number of extra-terrestrials I see who are not waring helmets or hi-viz, these kamikazy aliens are just asking too be killed.

‘British driver’ 12.47 pm
Cyclists are a danggerous menace. They jump red lights all the time. They should be made to pay road tax like the rest of us.