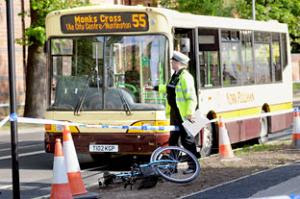 And now here’s the latest news from that cycling nirvana:

A WOMAN cyclist from York is today fighting for her life in Leeds General Hospital after she and a bus collided on a major York road. The cyclist, a 40-year-old local woman, sustained serious head injuries in the collision and is in a critical condition in Leeds General Infirmary.

The crash, in Fulford Road, was one of two accidents that brought traffic chaos to yesterday evening's rush hour with huge queues of traffic forming in Heslington, Fulford, the city centre and near the Poppletons.

The cyclist was rushed by ambulance to York Hospital at 5.25pm. She was riding a blue bicycle when it collided with the York Pullman No 55 service heading into the city centre from Fulford.

About half-an-hour earlier, firefighters had rescued a person who was trapped when three vehicles, a silver Citroen C3 taxi and a white Vauxhall Movano van, and a Toyota collided about 500 yards from the Poppleton turn-off on the A59 near the Wyevale Garden Centre.

A mile-long queue of stationary traffic developed on the A59 York-bound carriageway. The A169 at Low Marishes between Malton and Pickering was also closed and a woman was airlifted to Harrogate Hospital with neck and leg injuries following a road crash there.
Posted by freewheeler at 14:48