WF09YMC and other traffic criminals caught on camera! 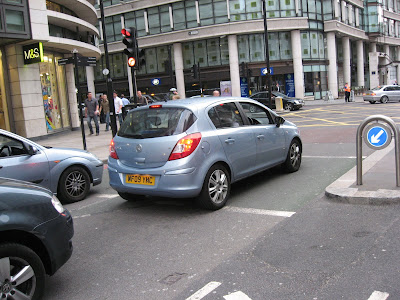 Last Friday evening at about 8.10 pm, on Gracechurch Street in the City of London. The driver of WF09 YMC enters the Advanced Stop Line for cyclists while the traffic light is at red. He also obstructs the cycle lane access to the ASL from the inside traffic lane. He’s also driving with one hand while engrossed in a conversation on a mobile phone – so engrossed he doesn’t even notice me taking his photograph. 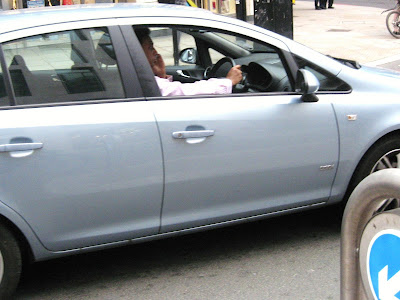 Ten minutes later on Threadneedle Street I snap the driver of this blue 4X4 who is steering while using a mobile phone held in his right hand. I don’t manage to get the number. 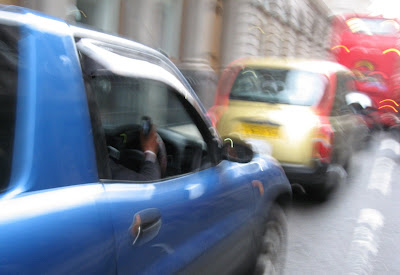 Ten minutes later on Cheapside. A City of London policeman pounces on a dangerous traffic offender, arrests him, and makes him wait in handcuffs at the roadside while a van comes to take him away. (below) 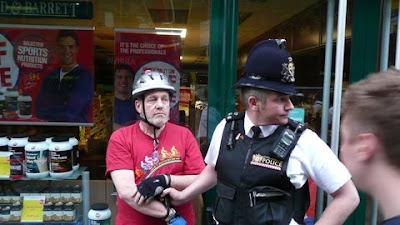 Apparently the prisoner was one of a number of cyclist who were in the way of motor vehicles, and for a cyclist to hold up traffic is quite rightly regarded as a very serious offence indeed. But then you only have to look at the prisoner to see he has criminal written all over him, right down to that T-shirt which is some sort of celebration of cycling and has bicycles provocatively pictured on the front.

It is the hallmark of an advanced society that a cyclist who has delayed traffic is arrested, handcuffed, and taken away in a van, whereas a driver who has run down and killed a child cyclist is quite rightly permitted to drive off so as not to inconvenience her or delay the flow of motor vehicles.

Last photo borrowed from this site, which comments:

the arrest really was just an uppity cop throwing his weight around. he'd asked the cyclist to move, and then hardly giving him a chance went on to say "right, you're under arrest".
all because of one cop's over-blown sense of pride. ridiculous. the cyclist was supposedly arrested for causing an obstruction and for obstructing a police officer. the obstruction charge was rubbish as he was part of a huge traffic jam and had nowhere really to go. the obstructing a police officer was just nonsense.
Posted by freewheeler at 14:56