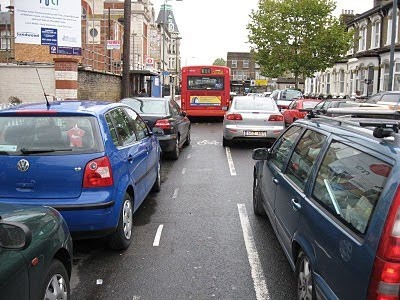 A cycle lane in Leyton.


The mayor has announced a 19 July 2010 launch date for the first two Cycle Superhighways, at the same time as publishing growth figures of 14% in two years and a 10-point plan to encouraging more cycling.

Welcoming the growth in cycling, LCC joined the UK’s major cycling organisations, along with the NHS, the police, London Councils and other signatories, in backing 10 cycling priorities set out by Mayor Boris Johnson.

growth figures of 14% in two years

Perhaps the most astonishing revelation of any London blogger this year has been the discovery that police have been halting traffic so that TfL can make a film showing how safe and friendly Cycle Superhighways are. Yet more spin over substance.

Only two of the ten points refer to tangible objectives (more secure cycle parking and ‘Cycle theft tackled through dedicated police attention’) but even these are lamentably vague about resources and targets.

How’s about: every parking bay in London at every station, supermarket, school and NHS building must be matched by a cycle stand? Crikey, no, nobody involved in this fatuous 10 point plan would want to sign up to a measure like that, would they? Far too dangerously radical. In the year 2008-2009 the London Borough of Waltham Forest received £450,000 to spend on cycling. For a borough which can’t even supply cycle parking at four out of ten of its public libraries, a good question is where did that money go?

One simply measure which would make vehicular cycling a lot safer is to return to the days when all side roads had STOP signs with a continuous white line, instead of GIVE WAY with a dashed white line. Far too many drivers approach junctions at speed, take a momentary glance for motor vehicles, then pull out. They don’t ‘see’ cyclists because they are in a tearing hurry.

But if you look at the Mayor’s shiny plan you’ll see that action is promised against cyclists, since

Public response to the consultation on the draft Mayor’s Transport Strategy indicated a growing frustration that cycling is undermined by a small number of cyclists who disregard the rules of the road.

But as this blog repeatedly argues, bad behaviour by cyclists is an evolutionary response to a car-centric transport environment.

Naturally there is nothing about safe, convenient cycling infrastructure on the Dutch model. Instead we are offered crap like this:

This really is a bad joke when you consider that up to one driver in eight in London is uninsured, and when you consider the spectacular levels of lawlessness which are very visible on every London street, and which are institutionally condoned, not least by the Metropolitan Police. You don’t have to wait very long to see someone drive past chatting on a handheld mobile phone, and some of those drivers are at the wheels of lorries. In reality London is now more dangerous for cyclists than it’s ever been

When even the Met’s own drivers repeatedly display their contempt for pedestrians and cyclists, I think we can do without the pious support of this profoundly cycling-hostile organisation. The Met could benefit cycling best by cleaning up its own act as an institutionally car supremacist organisation.

The London Cycling Campaign's enthusiasm for the 10 Point Plan is a collaborationist strategy because it demands that cyclists accept the status quo. Parking bays, car dependency, the West End full of people in 4X4s – let’s all learn to live together, eh? Well I am not interested in adjusting to car-clogged streets crammed with idiots in gas guzzlers and devoted to car dependency. I want to see the end of those on-street parking bays, I want to see Dutch infrastructure, I want to see bans on cars on Oxford Street and Regent Street. But the LCC doesn’t. The LCC is part of the transport establishment, not part of the movement for change.

You can promote it like that until you are blue in the face but when cycling is stressful, dangerous, unpleasant and inconvenient, most of the population won’t do it. And don’t. And will not, for the foreseeable future. This is a 10-point plan to nowhere, every bit as delusional as the LCC’s vision of ten per cent modal share by 2012.
Posted by freewheeler at 13:59