Why the Green Party is the enemy of cycling 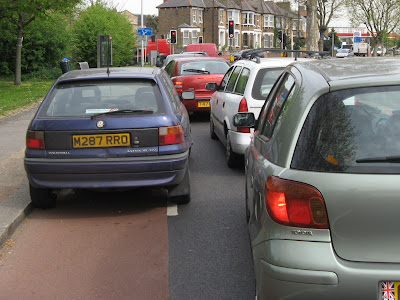 The Green Party is committed to the suppression of cycling in Britain. It is yet another obstacle to the development of a mass cycling culture.

I say that because at the core of the Green Party’s cycling manifesto lies this grotesquely arrogant and ignorant assertion:

Cycles are a vehicle and, as such, cycling should, wherever possible, take place on roads.

This insane policy – what’s known as ‘vehicular cycling’ - has the sticky fingers of a fanatical ideologue from the Cyclists Touring Club all over it. The CTC is not remotely interested in how mass cycling has been achieved in the Netherlands. It is run by zealots who, indifferent to that organisation’s decades of failure, are determined to keep their ostrich heads in the sand and insist that everyone else joins them in vehicular cycling. Nobody wants to face up to the stark fact that cycling has flatlined in the UK.

Most cycling campaigners are desensitized. They’ve been swimming in motorized sewage for so long they’ve become accustomed to it. Don’t mind the sharks and the shit – come on in everyone, the water’s lovely!

For the Green Party to allow its cycling policy to be written by vehicular cycling fundamentalists is like the Labour Party putting its manifesto commitments on Europe in the hands of UKIP supporters.

Instead of campaigning for safe segregated Dutch-style infrastructure on cycling terms – infrastructure with a proven record of success - the Green Party, like the fanatics of the CTC, pursues the doomed policy of attempting to ameliorate the conditions of vehicular cycling. This is a strategy with a proven record of failure. Its failure is evident in three very distinct ways.

Firstly, the risible modal share of cycling in Britain’s towns and cities. Most people don’t want to take up cycling on roads they rightly perceive as dangerous, nor do they see any reason to give up their cars in a transport infrastructure which prioritizes and pampers drivers. Cycling is not increasing in Britain and modal share struggles to get above one or two per cent just about everywhere. Vehicular cycling campaigners simply perpetuate this pathological condition.

(It's a subsidiary irony is that cycling organisations are comprehensively useless even at defending the infrastructure of vehicular cycling. Despite the massive abuse of Advanced Stop Lines, neither the CTC nor the London Cycling Campaign has ever organised a single protest. In reality they are part of the transport establishment, more interested in appearing respectable and chasing funding than in radically transforming the cycling environment. And
this is one of the big problems with cycling in Britain. It's a talking shop)

Secondly, the failure of vehicular cycling is written in blood, spilled with monotonous regularity each week as cyclists are smashed off their bikes, crushed, maimed and killed by the hordes of reckless and lawless drivers who infest Britain’s road infrastructure. The judicial system generally treats this carnage lightly, and even hit and run killer drivers can expect to get their licences back after a few years.

Finally, the failure of vehicular cycling is evident in the perceived widespread bad behaviour of cyclists who adapt to a hostile cycling environment by avoiding it altogether (cycling on the pavement or through city centres from which they are banned by pedestrianisation) or by ignoring rules designed to control vehicle flow and which ignore the safety and convenience of cyclists (red lights at junctions). There is no shortage of CTC activists who loudly denounce naughty cyclists for refusing to obey the rules of a motorized world, or who pathetically whine that cyclists must win “respect” from motorists by being on their best behaviour at all times.

The Green Party buys into all this madness with its core policy on cycling. It just goes to show how little cycling is understood even by Britain’s only environmental party.

I voted for the Green Party last week, but with very little enthusiasm. It was clear from the campaign literature that came through my letterbox that the local Greens don’t cycle and have no knowledge of, or serious interest in, cycling. The best they could manage was a platitude about improving conditions for cycling and walking, and a banal promise of more cycle lanes. At a national level things are even worse, because the Green Party simply doesn’t understand cycling.

So as far as I’m concerned, if the party hasn’t changed its policy by the next general election, it won’t be getting my vote any more. Do pass the message on to Caroline. She’s a very smart woman and if she was a cyclist herself or had any grasp of cycling (she plainly isn’t and doesn’t) she’d have used her influence to squash this fruitcake, cycling-hostile policy and replace it with a policy that asserts that Dutch-style cycling infrastructure is the only way forward. Because until that happens the Green Party will be an impediment to the development of mass cycling in Britain, not an enabler.

Let’s shout it as loud as we can:

VEHICULAR CYCLING HAS FAILED, IS FAILING AND WILL CONTINUE TO FAIL.

First photo above: crap vehicular cycling on the B159 in Leyton. I couldn’t get past the (legally) parked car and by the time I got to the traffic lights they had gone green, then red again. Next time, if there are no pedestrians present, I shall cycle on the pavement.

(Below) Crap vehicular cycling on Charing Cross Road in central London, where cyclists have the exciting opportunity to be equal with solitary drivers in gas guzzling absurdities. There’s no right turn on to Shaftesbury Avenue, because it would slow motor traffic down. So cyclists have to get off and walk, if they want to turn here. At both the sites shown in these photographs Dutch-style infrastructure is feasible, if only the political vision and will was there. 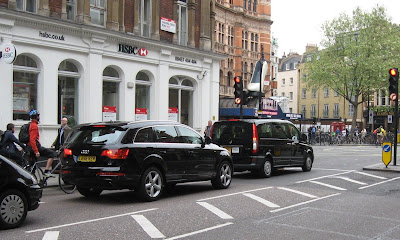 Posted by freewheeler at 13:38