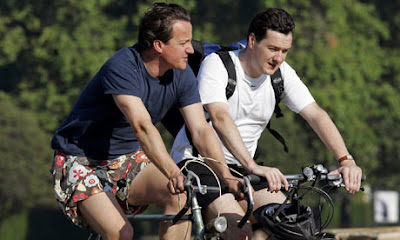 Watching the live helicopter coverage of David Cameron’s car leaving Buckingham Palace last night I was interested to note that it stopped at a red light, then the driver decided to ignore it and jumped the light – angry blaring of horns from the drivers of oncoming cars. And turning into Downing Street the driver overtook a cyclist and cut him or her up.

Yes, it’s the new cycling prime minister! (Well obviously this passionate cyclist needed a limo to get him that vast distance from Buckingham Palace to Whitehall.)

And if the prospect of four years of Tory government makes you feel in need of some relaxing comic escapism, why not watch hilarious stand-up comedian Koy Thompson as he excitedly anticipates the prospect of

a cycling prime minister, Cameron, with that leadership in Westminster and a cycling mayor there’s no better opportunity to turn London into a cycling city… cycling will accelerate to levels that will create a Copenhagen effect in London

Yes, who can doubt that a Tory government will transform cycling, committed as it is to

Give more powers to local councils to get traffic moving

Consult on our Fair Fuel Stabiliser

Such a shame that Koy’s glorious vision of a cycling mayor turned out to be built on sand and absurdly over-optimistic.

As for David Cameron’s cycling shorts. They should be banned.
Posted by freewheeler at 12:46