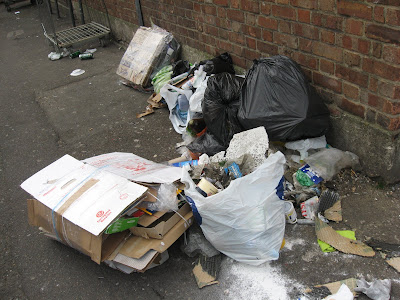 (Above) Central Walthamstow street scene under our new Labour council.

And the newly appointed cabinet member responsible for environment in the London Borough of Waltham Forest is… former leader of the council Clyde Loakes.

This seems an opportune moment to remind Clyde that although this blog is critical of the council, it is also objective and fair-minded. It did, after all, once salute the marvellous and progressive administration of Councillor Clyde Loakes. Sadly, things have gone backwards since then, with the Council's thirst for converting pavements into car parks growing ever stronger, and with Loakes toeing the party line on its demented 'neighbourhood improvement' schemes, which promote car dependency and degrade the walking and cycling environment.

Cllr Loakes needs to attend to all the crap which the deeply complacent council officers currently fail to deal with and which is highlighted here on a regular basis - everything from obstructed cycle stands, blatantly inadequate cycle parking provision, advisory speed signs which don't flash any more - they are all over the borough, Clyde - footway obstruction, squalor, potholes, general decay... And as far as the latter is concerned I’m only publicising a tiny fraction of the current condition of the borough.

Clyde, as it shows on his council page, is a member of a body concerned with waste. So maybe he could now address the daily problem of all the crap on Mission Grove, off Walthamstow High Street, besides Percy Ingles bakery, which faces a primary school and is permanently obstructed by market traders who use it as a place to park their trolleys instead of using the proper facilities, and by local traders who dump waste on the pavement (shown in the first photo) rather than pay to use a council trade waste container. This crap has been going on for YEARS.

(Below) The 'Welcome to Walthamstow' signs in the town centre continue to welcome visitors by directing them to toilets which were closed down years ago. That's just how crap and complacent this council is. 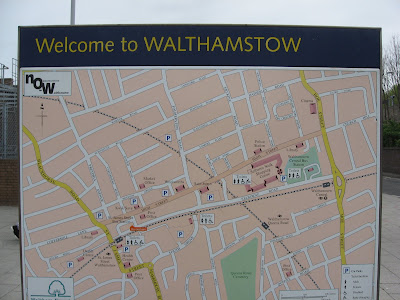 Posted by freewheeler at 10:25