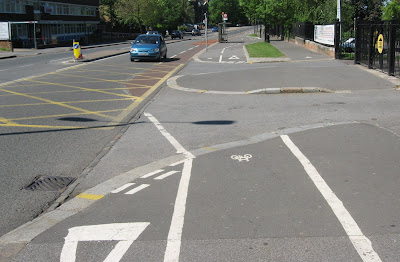 This photo shows the two motor vehicle access routes in and out of Waltham Forest College, beside the A503. These cut across two cycle paths and a cycle lane. The vehicular lane in the foreground is the exit, the further one the way in. The college is behind the railings on the right.

Here, cyclists have to watch out for vehicles coming out of the college, vehicles driving into the college, and hordes of students on foot who are shamelessly indifferent to those white lines and bike markings.

Motor vehicles have absolute priority at this nexus of conflicting interests, which is what you’d expect, is it not?

And the message is very clear. Whether you are a vehicular cyclist, risking your life on the A road, where drivers speed and lorry drivers chug along chatting on handheld mobile phones, or whether you prefer the off-road cycle path, which leads you directly to a busy bus stop, it’s still an inescapably crap experience.

Photo taken last Sunday, when the college was closed.

And if you’re wondering why the cycle lane is diverted off-road, it’s to allow cyclists to go behind some railings, past the traffic lights, and return to the A road here.
Posted by freewheeler at 10:07