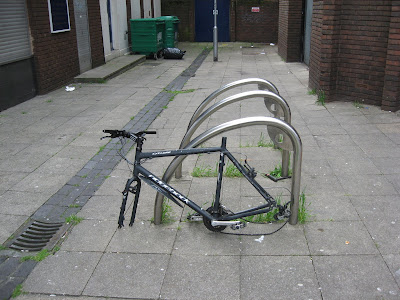 Another poignant symbol of something rotten in the state of cycling. Walthamstow High Street this week.

Safe, convenient and secure cycle parking is the second most important thing you can do to encourage mass cycling after you’ve installed safe, convenient, direct infrastructure. Not that the one comes after the other; they both need implementing in parallel. But you won’t get mass cycling if you neglect either. And there are no signs at all of a serious commitment anywhere in Britain to providing either. Inadequate cycle parking provision and empty stands are equally symptoms of a failure both of vision on the part of transport planners and an unwillingness by most people to cycle.

And what’s the lavish new 21st century provision? A fabulous seven stands! That’s right, parking for a maximum of 12 bikes (because the design is such crap that the stands at each end of the row are so close to the wall they can’t be used both sides).

See a fabulous photograph of this facility on page 195 of the Mayor’s newly published transport policy for London.

And whose vision of mass cycling is so stunted that they’d give an award for inadequate provision like this?

Meanwhile, where they take cycling seriously, you’ll find this.
Posted by freewheeler at 13:24