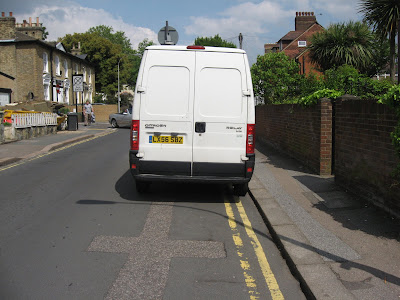 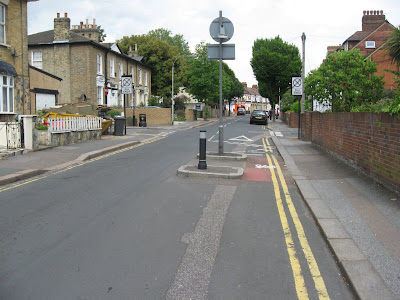 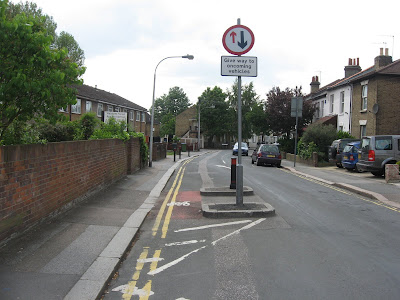 Some of the worst drivers on local roads are those who drive Waltham Forest Council vehicles. I’ve previously blogged about a number of instances of lawless driving, including council vehicles parked across the pavement and obstructing cycling infrastructure, with the most recent example being the council white van driver using a handheld mobile phone while driving along Willow Walk E17.

Yesterday I came across this new example on Grove Road E17, outside the Register Office. This is council van number 4223. (The council doesn’t exactly go out of its way to identify its vehicles from the rear.) I took the photo from the rear of the vehicle as the driver was sitting in the cab and I didn’t want to risk a string of obscenities, threats of violence or actual violence, which is an occupational hazard of photographing lawless driving.

It’s not simply that the driver is parked on double yellow ‘no waiting at any time’ lines. This idiot – a white male – had driven right up to chicane, placing his bonnet across the cycle lane, which is clearly marked and even has a bike logo on it. The engine wasn’t running. He was there at 2.45 pm and was still there at 2.55 pm.

The purpose of this chicane is to slow down motor vehicles, while supplying a lane which allows cyclists to avoid conflict with oncoming motor vehicles. This council employee managed not simply to block access for cyclists but also to create an additional hazard by blocking sight lines for all road users.

In its climate change document the council blathers in management-speak about the role of the individual:

Behavioural change makes a significant contribution to both adaptation and mitigation activity and needs to be driven forward, primarily through the actions identified in the communications and outreach theme.

Which is a bit rich from a council which can’t even get its own drivers to obey road traffic law or display rudimentary common sense and respect for other road users.
Posted by freewheeler at 08:55