The Ride of Silence 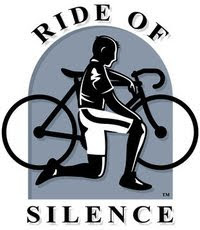 On May 19, 2010, at 7:00 PM, the Ride of Silence will begin in North America and roll across the globe. Cyclists will take to the roads in a silent procession to honor cyclists who have been killed or injured while cycling on public roadways.

There don’t seem to be any mass ‘rides of silence’ in the UK, that I know of.

Apparently some cycling organisations think they just frighten people and deter them from taking up cycling.

So instead, let’s all sing along to the great British cycle campaign song.
Posted by freewheeler at 14:27