In denial: the strange fantasy world of the London Cycling Campaign 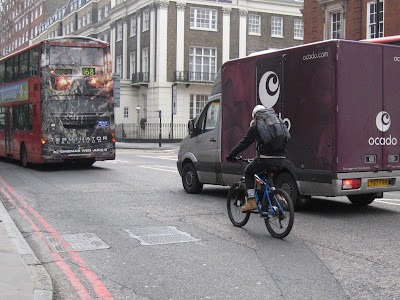 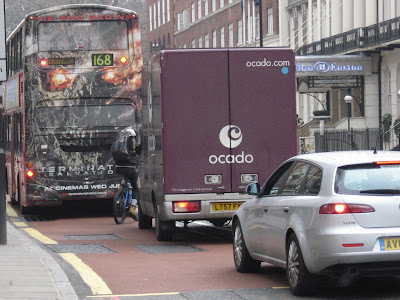 
Pedal power could help to decide the outcome of the election, campaigners said today, claiming that cycling policy could be the key to winning marginal seats. "This could really be the cyclist's election, and in marginal seats both locally and nationally we believe our members can really make a difference," said Tom Bogdanowicz of the London Cycling Campaign.

The reality is that not a single political party gives a toss about cycling or has an effective manifesto commitment which would increase cycling. This reflects the fact that there is no cohesive cycling community and that Britain’s two main cycling organisations, the CTC and LCC, are toothless and ineffectual. Worse, they are committed to vehicular cycling, with its proven track record of failure.

The notion that this is ‘the cyclist’s election’ is entirely typical of the self-regarding fantasy world of British cycle campaigning.

The reason for that decline has nothing whatever to do with a lack of cycle training and everything to do with the danger and inconvenience of cycling on London’s cycling-hostile streets. Few parents want their children to cycle to school in London and no one can blame them. The London Cycling Campaign is itself an obstacle to any increase because it remains fundamentally committed to the failed strategy of vehicular cycling. Vehicular cycling obliges cyclists to share the roads with drivers who are uninsured, chatting on mobile phones, speeding, jumping red lights, and contemptuous of on-road cycle infrastructure such as Advanced Stop Lines. Already it is clear that even when cycle lanes and ASLs are marked out in Copenhagen blue on 'Cycle Superhighways' drivers will continue to invade the infrastructure, to the detriment of cyclists.

Deliver sufficient cycle parking for staff and visitors at all council, NHS and school buildings, and make it a requirement in all relevant planning applications.

Leaving aside the fact that for over 30 years the LCC has been totally ineffective in campaigning for adequate cycle parking in London, note the sheer feebleness of that word ‘sufficient’. The LCC also manages to miss out railway and tube stations.

I find it quite interesting that the Walthamstow Bike Shed is regarded as one of the wonders of the UK cycling world. In reality it’s farcically inadequate. Even more interestingly, since the Bike Shed opened six years ago, the council has sold 521 access cards to cyclists. That’s for a facility which contains just 28 cycle stands. In other words, cyclists have been defrauded on a massive scale and have paid for a card to access a shed which is usually full. Have you read about that in London Cyclist? Nah, thought not.

This is lamentably vague. Does LCC mean return to two-way operation for all traffic or just cyclists? The reason why one-way streets and gyratories continue to proliferate in London is to manage motor vehicle flow. No local authority transport planner (car supremacist to a man, and most of them are men, on car allowances) is going to want to change that. And exempting cyclists from one-way systems doesn’t in itself make them cycling friendly.

Reduce casualties involving lorries through a driver-cyclist awareness programme for all council HGV drivers, and by council membership of the Freight Operators Recognition Scheme.

It’s not for want of trying that the London Heavy Goods Vehicle problem isn’t going away. Everything from critical mass gatherings to Lorries fitted with extra mirrors is being tried and tested. Unfortunately the number of incidents doesn’t seem to be slowing down.

Everything? Everything, that is, except safe segregated cycling infrastructure on the successful Dutch model.

This is hardly an LCC initiative. In reality 20 mph zones often fail to keep vehicle speeds down to 20 mph and in any case a 20 mph zone does not in itself make a road cycling friendly. Waltham Forest has plenty of 20 mph zones and they are unpleasant places to cycle, since they all involve cycling down a corridor of parked cars with traffic passing unpleasantly close.

Back an investment plan that will enable the boroughs to surpass the Mayor's target of a 400 per cent increase in cycling by 2026.

You can always tell a dodgy cycling campaign by its preference for flashy statistics about percentage rises in cycling rather than modal share. Transport for London and the LCC both have a vested interest in pretending everything is rosy and getting better, when it isn’t. Modal share in Greater London is 2 per cent. It is unlikely to grow. Back in 2000, the LCC subscribed to the delusion that modal share in Greater London would be 10 per cent by 2012. With that failure staring it in the face the LCC now chooses amnesia and a new target.

In any case, what sort of ‘investment plan’? Just giving boroughs money to spend on cycling without specifying exactly what it should be going on, is another recipe for failure. And the only thing worth spending money on is Dutch-style infrastructure, which is precisely what hasn’t happened in the past and isn't being asked for in the future.

Encourage council staff to cycle by signing up to the government Cycle To Work Guarantee scheme.

No, encourage them to cycle by providing them with safe, convenient cycling infrastructure that makes cycling to work more attractive than driving.

In any case the Cycle to Work scheme is a sham. It excludes those on the minimum wage and it benefits higher-rate taxpayers most, who can get a 50 per cent discount on a new bike, more than basic-rate taxpayers. By definition it excludes the unemployed, whose numbers are likely to grow under the next cost-cutting government. Most absurdly of all, it enables you to get a subsidised bike without having to use it to cycle to work every day. Once you’ve got it, there are no checks to see if you use it, or simply keep it to stick on the back of your 4X4 the next time you go to a CenterParc.

Notice the incoherence of this last policy statement. ‘Car-free Sundays’ are just the kind of cosmetic, meaningless rubbish that local councils love, because it creates the illusion of promoting cycling while doing precisely nothing to bring it about. ‘Car-free day’ used to be held on Saturdays but it upset too many drivers, so naturally it was moved to Sundays.

As for ‘reducing car dependency and re-allocating road space to cycling and walking’. Maybe the LCC hasn’t noticed but London local authorities are doing exactly the reverse. Pavements continue to be re-allocated from pedestrians to create parking bays in boroughs across London, to make parking easier for those who choose to own multiple vehicles or bigger vehicles. When the Greater London Assembly consulted on parking management the thoroughly useless London Cycling Campaign was too idle to bother sending in a response.

The reality is that the London Cycling Campaign is a major obstacle to the development of mass cycling in London. It is patently ignorant of, or indifferent to, what has been achieved in the Netherlands. It’s an organisation which declines to see the failure which it is itself deeply complicit in.

“We believe that if we elect people who get cycling wrong, London will grind to a halt," Mr Bogdanowicz said.

It's hardly a surprise that politicians get cycling wrong, when cycling organisations themselves don't demand infrastructure that works. Until this changes, the future of cycling in Britain is bleak and modal share is unlikely to grow.

(Below) Oxford Street, where cyclist Jayne Helliwell was killed by a bus driver. 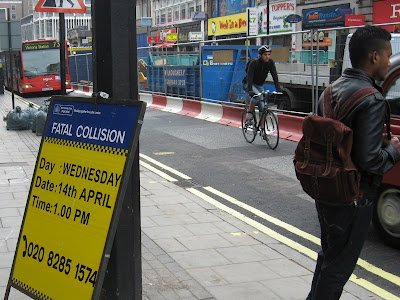 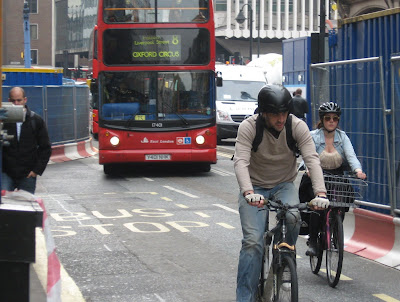 (Below) Notice the woman who is pushing her bike because her journey has been obstructed by the roadworks. 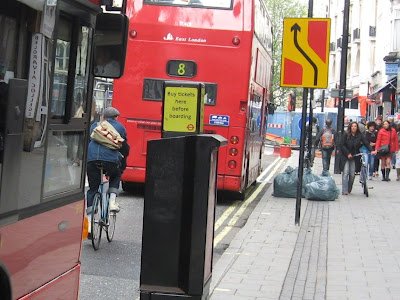 Posted by freewheeler at 13:33