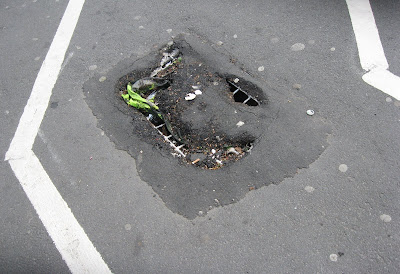 The reason why segregated cycling infrastructure has such a low reputation in Britain is that where it exists it’s, well, total crap.

It’s almost invariably badly designed (by transport planners who almost certainly don’t themselves cycle), when it eventually meets the highway you can be sure that cyclists will automatically take second place to motor vehicle flow. And last of all, like cycling infrastructure generally, it's badly maintained, because cycling isn’t something that most people do, whether they are transport professionals or local councillors.

This example of rubbish cycling infrastructure can be found alongside the A503 in Walthamstow, by the junction with Spruce Hills Road E17. It’s almost in sight of the Town Hall, which seems somehow appropriate.

The cycle path usually contains pedestrians because it runs past Waltham Forest College. It also requires cyclists to give way to cars coming in and out of the college. And it contains dangerous crap like the surface shown above. Evidently a utility hatch in the cycle path has been broken (and these are usually damaged when heavy goods vehicles drive over them, which in itself tells you something about this cycle path).

Instead of replacing the frame and hatch, the contractors employed by the council appear to have cut corners by laying plastic bags over the damaged frame and then putting tarmac on top, without replacing the hatch. The work of cowboys. Are any of the new batch of Labour councillors bright enough to start asking the officer responsible for this work some very hard questions? Or is it going to be four more years of complacency?

And here's where this crap cycle path leads. It invites cyclists to take a sharp turn and ride directly out into the path of two lanes of fast moving traffic on an A road, with no physical protection. Just another reason why most of the population of Waltham Forest have no interest in taking up that danger-filled activity known as cycling. 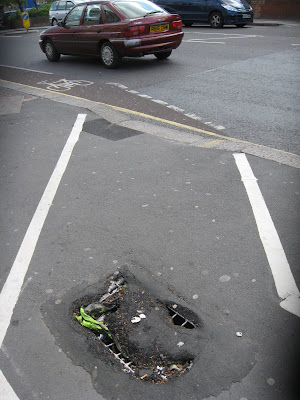 Posted by freewheeler at 12:39