At approximately 1845 on Friday 12 June a dustcart travelling eastbound was in collision with a 24 year old female pedal cyclist in Charterhouse Street at the junction with Holborn Circus, EC1.

She was pronounced dead at the scene. Next of kin have been informed and positive identification has taken place. The deceased, a Spanish national, has been named as Miss Maria Emma Garcia-Fernandes, an English student, from Stepney Green.

A post mortem, held on Monday June 15 at St Pancras mortuary, established cause of death as head injury. The dustcart stopped at the scene. The driver, in his 60's, was arrested on suspicion of causing death by dangerous driving. He has been bailed pending further enquiries.

(My source is confidential. I don't think this fatality has yet been noted by any on-line media.)

This is now the third death of a woman cyclist at a busy London interchange recently, and follows the deaths of Adrianna Skrzypiec crushed to death by a hit and run lorry driver in Greenwich and Meryem Oekman crushed to death at the notorious Elephant and Castle interchange.

On the face of it, this sounds very much like yet another left-turning heavy vehicle fatal collision. 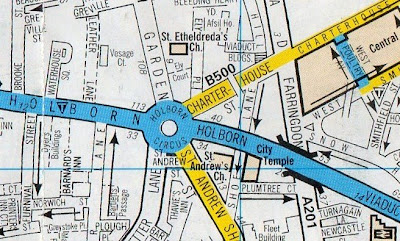 The British media is silent, including the massively-resourced car supremacist BBC. As yet the only on-line media to register this death is in Spain

The Spanish link has now been removed, although if you tap the cyclist's name (apparently slightly mis-spelled in the source cited above) into Google News you still get the start of it:

My guess is that today's London Evening Standard will carry the story. We'll see.
Posted by freewheeler at 15:53