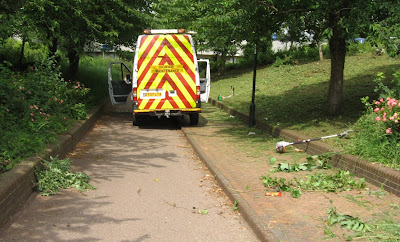 Yesterday morning. The off-road cycle lane at the Crooked Billet, blocked by a van. And not just any van. These contractors (whose indifference to cyclists is only matched by their contempt for pedestrians) are working for Transport for London, via London Streets, as incarnated by AMEY. Amey are yet another of those crap contractors whose website drips with Greenwash gibberish:

We therefore aim to provide world class services that provide benefit to all our stakeholders, whilst operating within environmental limits; limiting our impact where possible; working to the highest level of integrity; maximising the benefits and minimising costs. Specifically, Amey will be an exemplar in sustainability, adding value by taking action over and above minimum compliance, whilst ensuring that our own competitive interests, the interests of our customers, of wider society and the environment are given equal consideration under the principles of sustainable development.

Unfortunately finding a van in the cycle lane was just the start. If, having read this post, you feel like emailing Jenny Jones, the Green Party's transport spokeswoman on the London Assembly, you can do so at this address: jenny.jones@london.gov.uk
To complain to Boris or TfL the details can be found here. What I want to know, apart from why TfL is employing contractors which display zero awareness of cycling safety, is why this work isn't being done by a cycle-based firm. You do not need to drive a van down a cycle lane in order to carry two strimmers and dispose of some vegetation. A bicycle based firm could do this stuff. Why isn't TfL encouraging Green bike-based business? Why isn't Boris?

(Below) As I approached the cycle lane exit on to the northbound A112, I encountered more Amey morons. I couldn't believe where these clowns had chosen to park. Right in front of the cycle exit, forcing cyclists out into the middle of the carriageway at a lethal location. Unbelievable. These characters were not doing work on the carriageway but in the underpass, evidently pruning the vegetation. The white van shown above had no one in it. 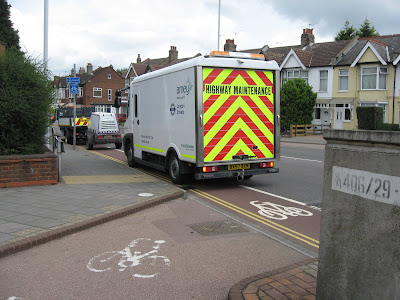 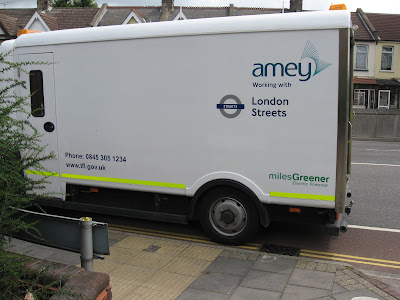 (Below) Probably not driving at less than 30 mph. High speed traffic leaves the North Circular and joins the northbound A112. 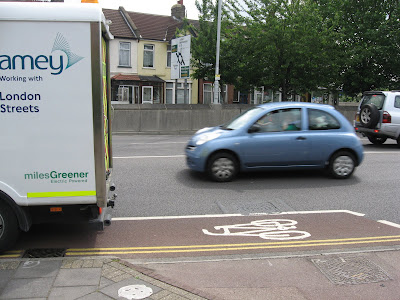 (Below) Looking back in the other direction. High speed traffic comes racing round off the North Circular. Drivers are given no warning that cyclists will suddenly appear in the road from behind a wall. Cyclists are given no physical protection from oncoming traffic and have to rely on drivers keeping off the dashed white lines. 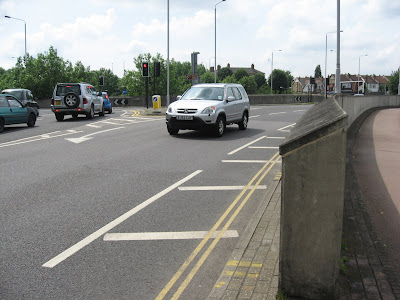 Posted by freewheeler at 07:55