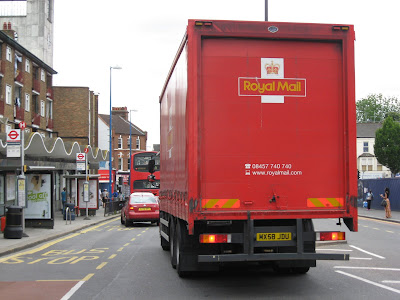 The driver of this Royal Mail HGV missed me by a fraction yesterday morning. Bike Week day five! I was cycling south along the A112 and I was a few metres beyond the junction with Cairo Road E17 when the driver overtook and, to my horror, lurched into the cycle lane. The cycle lane at this point is, I think, about a metre wide (I'll measure it next time I'm passing). I suddenly experienced the blind terror of giant wheels thundering by just beyond the end of my right handlebar.

If I'd gone under the wheels, probably no one would have witnessed it happening. And in the absence of witnesses a prosecution becomes a lot less likely. Cyclists die on busy London streets in apparently mysterious circumstances, like Eilidh Cairns.

The driver had to brake because the traffic was backed up from the lights at the junction with Church Hill, so I pulled over and took this quick picture.

Why did the driver do it? He was in a hurry, I think. The road lay-out, which curves left and changes from one lane to two lanes at this point, with a traffic island down the centre of the carriageway, encouraged him to move over to the left into the cycle lane. And for all I know he was preoccupied in his cab by something other than driving. Maybe he'd been up since 5 a.m. and had one more delivery to make. Unless he was texting, he can hardly have been unaware that he was overtaking a cyclist. I did not undertake, there was no junction, and visibility was not an issue.

At the end of the day the more people that ride, the safer it is for all cyclists, asserts David Dansky from ‘Cycle Training UK’ in the London Cycling Campaign’s magazine London Cyclist (June-July), p. 21.

It's a message which both the London Cycling Campaign and the Cyclists Touring Club are keen to propagate. My own position remains unchanged. I think London is a very dangerous city to cycle in and although a cyclist can minimise risk, you cannot escape the danger posed by the widespread reckless negligence of drivers. And it happens to everyone. Jon Snow says Several times a week something happens that perhaps a second or two later, or a metre or so closer, might have killed me. Chirpy Rob Ainsley is plainly a careful cyclist, so I was interested when he recently described how he was nearly crushed twice yesterday evening on the way home, once by a French lorry and once by a bendy bus.

On the issue of road danger, I line up with David Hembrow:

There is a problem here for those who promote cycling in the UK. While Britain's overall safety record is comparable with that of the Netherlands, British cyclists experience about four times the level of danger. Increasing their numbers will lead to the UK's overall casualty rate worsening... "Safety in numbers" is as much wishful thinking as anything else.

Earlier in the day, not all that far away

A 12-YEAR-OLD boy was struck by a car in rush hour traffic. The school boy was hit in Shernhall Street, Walthamstow, just before 9am this morning. He was taken by London Ambulance to the Royal London Hospital where he is in stable condition. Shernhall Street was closed both ways at the Forest Road junction while accident investigators were at the scene but has since been re-opened.

That crash site is a short distance from here.
Posted by freewheeler at 09:34