Ghost bike on the A23 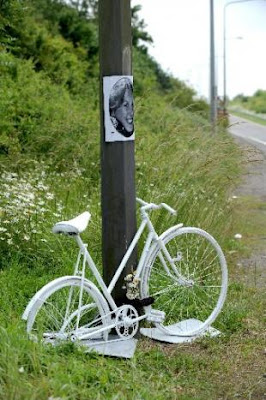 “One year has passed and Marie has died for nothing, like an animal squashed on the road, with not a single sanction for any of the responsible parties.

(Do read the comments below the story, some of them very ugly ones.)

Marie was part of a group of twelve cyclists who left Brixton in the early hours of the morning to join the Smash EDO demo. They were on the A23 by Burgess Hill when an impatient gas guzzling imbecile swerved across two lanes straight into Marie, then another car hit her. She died instantly, there was nothing her friends could have done. The driver of the second car got straight on his phone as soon as he came to a halt - not for an ambulance but to call his lawyer.
Posted by freewheeler at 07:51