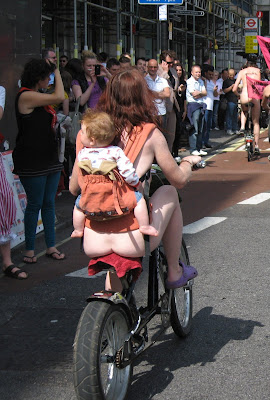 Rider and organiser Sean Fitton, 43, from Radcliffe, said: "When we got to Portland Street officers stopped us, causing a major back-up of traffic. The officers instructed the riders to put on clothing, stating at first that there had been a complaint that there were children present, then that a previous agreement had been made for the riders to cover up. There had never been any agreement that we would cover up. That wouldn't be a naked bike ride then would it?

"The officers finally backed down when they realised several riders had no clothing with them, so they let us go telling those without clothes to ride in the middle of the others where no-one would be able to see them."

They rode up and down Ecclesall Road from Endcliffe Park to the city centre and back with their bodies clad with slogans and one even wearing a flower in her hair.

No fewer than 42 men and women (and two appropriately clothed children) spun a well-watched path down Main Street early Saturday afternoon en route to the Statehouse.

The majority of Toronto’s birthday suit riders were men, but a few women showed up as well. One cyclist named Anna said she got involved because she felt it was a good cause. “I did wear a bikini because last year when I did it (nude), my boss recognized me from the back,” she said.
Posted by freewheeler at 07:50