This cycle lane will slay you 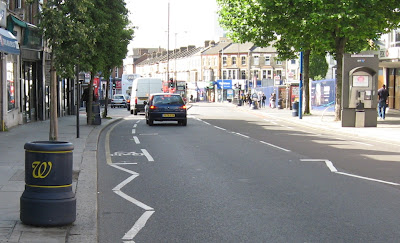 In a spirit of open-minded scientific enquiry I went back to the site on Hoe Street E17 to see if I could understand why the driver of a heavy goods vehicle strayed into the cycle lane, coming dangerously close to me.

And it's easy enough to see why it happened. The road curves slightly to the right, before opening up into two lanes. At the very point where the cycle lane curves out to the right, drivers are forced to move left by a long traffic island some forty metres long, built in the centre of the carriageway and directly in the way of oncoming drivers. (You can spot the island in the last photo below.)

I think I was just beyond the black litter bin in the photo below (just beyond the first tree on the left) when the lorry driver veered into the cycle lane. The problem here is that although the dashed white line in the centre of the carriageway runs in a straight line, the cycle lane markings curve to the right, following the line of the kerb. The carriageway actually narrows just at the point where drivers are forced to move left. Smaller vehicles like the white van feel no need to enter the cycle lane, but drivers of bigger vehicles plainly do. 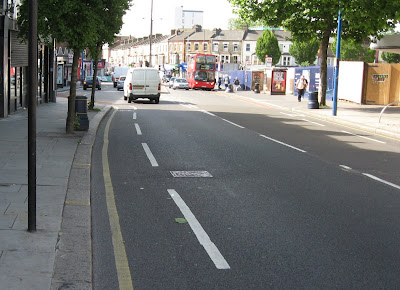 In the photograph below, a car moves across the cycle lane to get into the left hand lane. 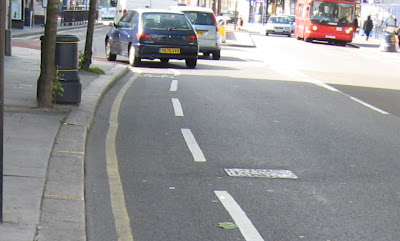 What is to be done? The traffic island needs shortening, which would allow the dashed white line in the centre of the carriageway to run further. This would encourage HGV drivers to move left further down the road, not at the very point where they come into conflict with a cycle lane.

Ideally, the borough's near-invisible cycling officer should be made to pedal repeatedly down this stretch of cycle lane until she has experienced and understood the danger its design poses.
Posted by freewheeler at 09:30